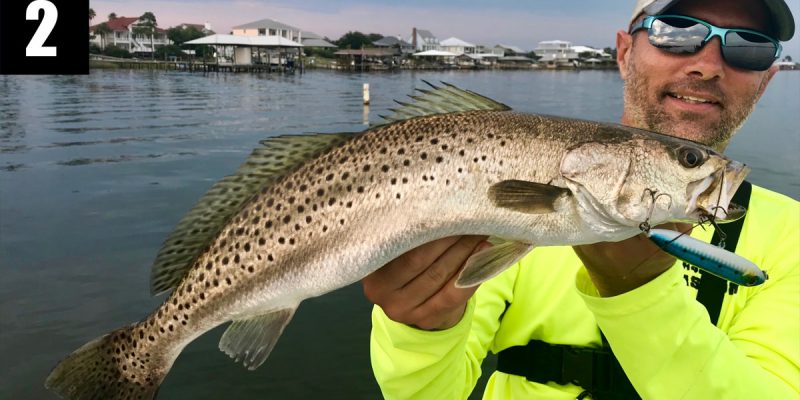 After scuffling through our first 24 hours fishing for speckled trout along the Florida panhandle, my son, Joel, and I began to put things together and have some success throwing topwater plugs during our next fishing stretch.

We had made the three-hour drive from Southeast Louisiana to the sun-drenched, salty coast near the Florida/Alabama state line, only to find the boat traffic worse than the lower Tickfaw during a poker run. As a result, we struggled to put much of a pattern together, catching only trash fish and one redfish during Friday afternoon and Saturday morning fishing trips. Speckled trout were nowhere near our boat.

But on Saturday afternoon, we found a large turtle-grass flat rimmed by buoys designating it a no-motor zone. The water wasn’t as deep as we would have liked for an afternoon trip, but we figured the flat gave us our best chance for boating a 5-plus-pound speckled trout, which was the purpose of the trip to Florida.

We finally had some success on that afternoon trip. We still got far more blowups on our Matrix Mullets than hookups, but some fish weren’t as lucky as others. We followed that Sunday morning with a trip back to the same grass flat with similar results.

Both of those successful trips are included in the latest video release on the Marsh Man Masson channel. Check it out below. Part One is also available at the channel, and Part Three, the final installment, will be released later this week.

Like the video? Please give it a thumbs-up, and subscribe to the Marsh Man Masson channel on YouTube. Also, leave a comment below or on the YouTube page. Have you done much fishing for speckled trout in the state of Florida? If so, which part? Did you have success? What were your techniques?

Interested in more news from Louisiana? We've got you covered! See More Louisiana News
Previous Article APPEL: Medicaid Expansion And Other People’s Money
Next Article SADOW: Louisiana Isn’t Likely To Factor Much In The 2020 Presidential Primaries