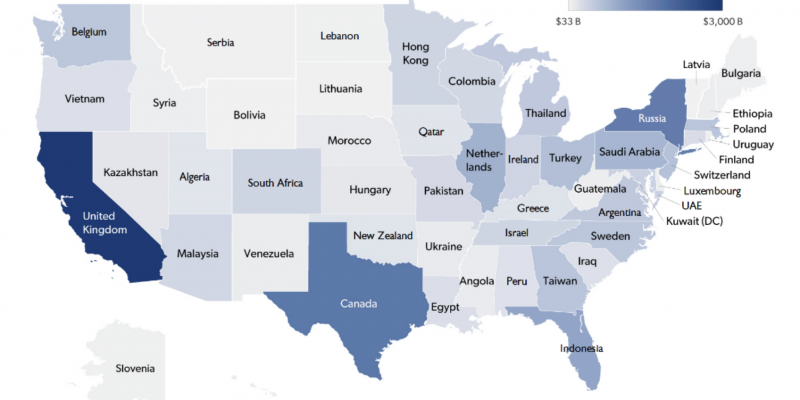 The U.S. gross domestic product (GDP) is more than $21 trillion, dwarfing the economies of most other countries in the world. China’s GDP hovers over $14 trillion; Japan’s over $5 trillion.

Most Americans can’t appreciate or comprehend how large these GDPs are, explains Mark J. Perry, professor of finance and business economics at the University of Michigan-Flint and scholar at The American Enterprise Institute. That’s why he creates a map every year comparing economies of states to countries to “help people understand how enormously large the U.S. economy is,” he told The Center Square.

Four states, California, Texas, New York and Florida, produced more than $1 trillion in output. If they were each countries, they would have ranked in the world’s 16 largest economies in 2018.

California’s GDP was greater than the United Kingdom of England, Wales, Scotland and Northern Ireland (U.K.); Texas’ was larger than Canada’s; New York’s was larger than Russia’s, and Florida’s is comparable to Indonesia’s.

Combined, they produced nearly $7.5 trillion in economic output in 2018, which would be the third-largest economy in the world.

GDP broadly measures a nation’s overall economic activity, representing the monetary value of all completed goods and services produced in that country within a specific time period. GDPs are calculated annually and quarterly.

Samuel Stebbins and Grant Suneson at the financial website 24/7 Wall St. point out that the majority of U.S. states are smaller in both population and landmass than their GDP comparable-countries. They also compared state GDPs to countries in a similar report to Perry’s.

Because U.S. states have far more developed economies, their GDPs per capita are higher, they note. U.S. consumer spending and highly developed industries backed by advanced technology also contribute to states’ economic advantages over their country counterparts, they add.

The state with the greatest GDP is California.

“That’s a testament to the superior, world-class productivity of the American worker,” Perry says.

The second largest state economy and the world’s 10th largest economy last year was Texas’ $1.8 trillion worth of economic output. The Lone Star’s GDP was slightly greater than Canada’s $1.71 trillion GDP. In order for Canada to produce the same amount as Texas, it would need 6.2 million more workers, Perry notes.

Despite California’s output, California leads the nation in out-migration, and more of its residents are leaving for Texas. It costs more to leave California for Texas than it does to leave Texas for California, Perry found.

U-Haul’s one-way truck rental rates are market-based, he argues, which is why truck shortages in California increase costs. There are also more trucks in Texas and there is a relatively low demand to go to California from Texas, he adds.

In the same analysis conducted in 2016, the ratios for the same matched cities were much smaller, 2.2 to 2.4 to 1, which he says suggests that “the outbound migration from California to Texas as reflected in one-way U-Haul truck rental rates must have accelerated over the last three years.”

The third and fourth largest GDPs were New York and Florida, respectively.