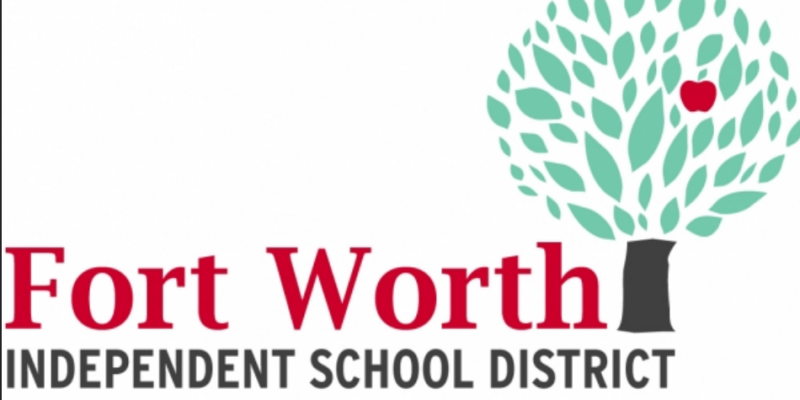 Georgia Clark, an English language arts employee of the Fort Worth school district, was placed on administrative leave with pay after officials said she tweeted remarks about immigration policy to President Donald Trump, an act which is protected by the First Amendment.

She asked Trump to crack down on illegal immigration at Carter-Riverside High School. One posting listed her phone numbers and asked that Trump help remove “illegals from Fort Worth.”

Below is what she tweeted: 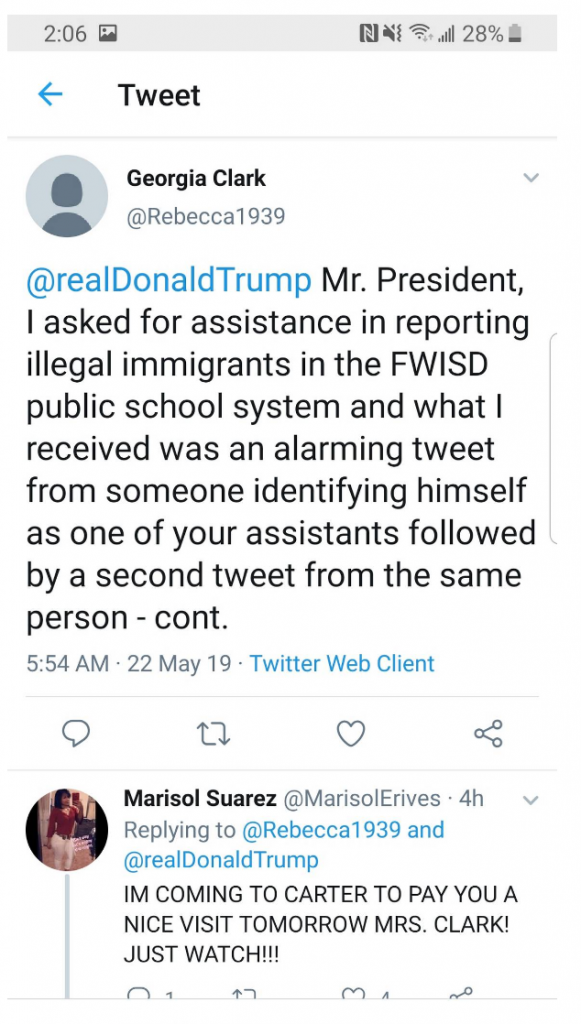 The account, @rebecca1939, was also deleted the next day.

“The district is reviewing its options,” Clint Bond, spokesman for the school district, told the local news.

Superintendent Kent P. Scribner issued voice and email messages to parents Wednesday evening in Spanish and English about the school’s social media policy, saying, “As we conclude the school year this Friday, please know we take this promise very seriously and your child’s safety and well-being are always our number-one priority.”

“Teachers are expected to abide by the district’s employee standards of conduct,” he said. “Employees are held responsible for their public conduct because they are role models to students,” according to district policy, which includes public use of electronic media and content posted on personal social media accounts.

“If an employee’s use of electronic media interferes with the employee’s ability to effectively perform his or her job duties, the employee is subject to disciplinary action, up to and including termination of employment,” district policy states.

The Texas Association of School Boards (TASB) states that the U.S. Supreme Court has also held that employees don’t lose their First Amendment rights when they enter a school.

The TASB states that when speech is protected, districts can’t retaliate against employees, the Star Telegram reported.

“On the other hand, when an employee’s speech does not have First Amendment protection, the employee may receive a reprimand, change of assignment, or even dismissal as a result of speech, in accordance with other law and policy,” it states.

In a Jan 6. tweet, Clark stated that Texas school districts were protecting illegal aliens who don’t have legal status.

Earlier this month, she also tweeted that she contacted federal authorities about the issue.

One post directed to Trump’s Twitter account stated: “Mr. President, I asked for assistance in reporting illegal immigrants in the FWISD public school system and what I received was an alarming tweet from someone identifying himself as one of your assistants followed by a second tweet from the same person — cont.”

Another message singles out Carter-Riverside.

“Mr. President, Fort Worth Independent School district is loaded with illegal students from Mexico. Carter-Riverside High School has been taken over by them. Drug dealers are on our campus and nothing was done to them when the drug dogs found the evidence.”

She’s not the only one concerned about illegal immigration in Texas, or the U.S., for that matter.