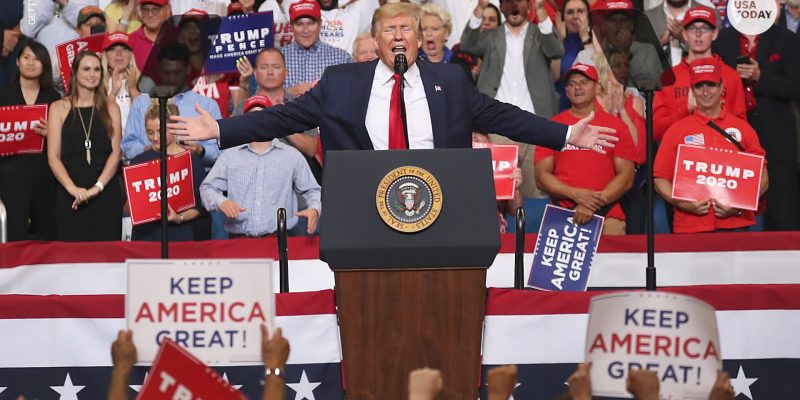 President Donald Trump kicked off his 2020 re-election campaign last night in Orlando, Florida, appearing before a packed stadium of supporters that seats 20,000.

Some Trump supporters waited in line over 40 hours before doors opened to secure their spot. During his speech, he officially unveiled his 2020 re-election slogan: “KEEP AMERICA GREAT”.

Here are some of the best Donald Trump quotes from his raucous re-election rally speech:

“Our economy is the envy of the world, perhaps the greatest economy we’ve had in the history of our country.. The American Dream is back.”

“The only collusion was committed by the Democrats..”

“The FBI told President Obama about possible Russian interference and he did nothing because he thought that Hillary Clinton, Crooked Hillary was going to win.”

“I will soon have appointed my 145th judge. President Obama was very nice to us. He didn’t fill the positions.”

“Just imagine what this angry left-wing mob would do if they were in charge of this country.”

“This election is a verdict on whether we want to live in a country where the people who lose an election refuse to concede and spend the next two years trying to shred our Constitution and rip your country apart.”

“We rebuilt China. They’ve done a great job, but they took us for suckers, and that includes Obama and Biden.”

“By the way, those trade deals are getting very good folks, you will see.”

“She used another word. You know what the other word was? She said, deplorables and irredeemables. I think that was worse, but it didn’t get picked up.”

“I have news for democrats who want to return us to the bitter failures and betrayals of the past. We are not going back, we’re going on to victory.”

“You know, I’ve cut more regulations than any president in the history of our country, regardless of the length of their term.”

“And that is why tonight, I stand before you to officially launch my campaign for a second term as president of the United States.”

“Since the very first day I walked through the doors of the White House. I have never forgotten who sent me there, You did.. you all did.”

“We are keeping our promises to the American people, because my only special interest is you.”

“They said it wouldn’t be possible. We have lifted more than six million Americans off of food stamps..”

“The unemployment rate is the lowest rate it’s been in over 51 years, think of that.”

“..thanks to our brave warriors, the ISIS caliphate that you’ve been hearing so much about, has been totally obliterated 100%.”

“We’re charting a path to stability and peace in the Middle East, because great nations do not want to fight endless wars.”

“A vote for any Democrat in 2020 is a vote for the rise of radical socialism and the destruction of the American dream.”

“We will elect a Republican Congress to create a safe, modern, and lawful system of immigration.”

“We have been blessed by God with the greatest nation on the face of the earth and we are going to keep it that way.”

Interested in more national news? We've got you covered! See More National News
Previous Article VIDEO: Here’s How Stupid The Transgender Advocacy Argument Really Is
Next Article Wonder What Those Pro-Choice Hollywood Donors Think Of JBE Now That He Has Their Money