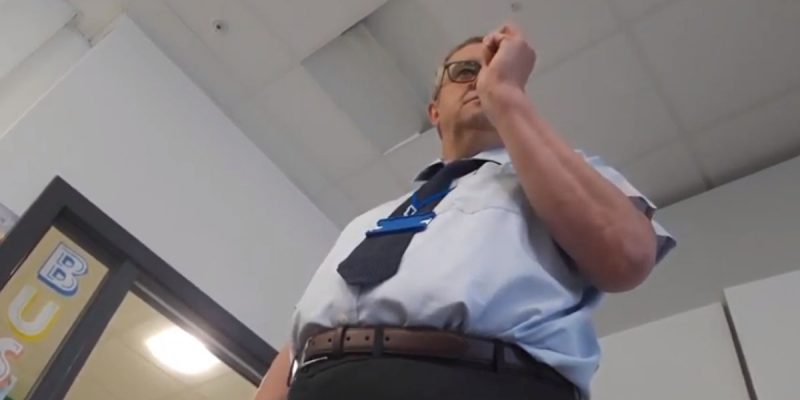 Rod Dreher at The American Conservative gets credit for smoking out this true gem. It’s a cellphone video from what appears to be a high school student in Scotland, who it seems goes by the name of Murray, who started filming when his teacher, who had kicked him out of class for taking the position that there are really only two genders – male and female – during a discussion of that subject.

Here’s the video. It goes about three minutes.

Notice how the teacher has absolutely zero defense for his actions? It’s a pure appeal to authority which is reminiscent of the “two plus two equals five” argument in George Orwell’s 1984. Because the national school authority says there are – whatever number of genders our cultural Marxist betters has decreed these days – your opportunity as someone who sees no logic or reason to that position is to keep your mouth shut.

And if you don’t take advantage of that opportunity? Why, punishment then results.

Teacher: “I am not putting my opinion out. I am stating what is national school authority policy, okay?”

Student: “But it’s not scientific whatsoever.”

That is certainly true, as there is no science whatsoever to the idea that your gender is whatever you choose it to be. Murray, the Scottish student, is precisely right in saying there are men and women, and everything else is an identity choice rather than a gender. While the interests of politeness might well behoove us not to abuse those who, for whatever reasons, be they mental illness or something else, cannot color within the lines of their plumbing – that doesn’t extend to an obligation not to speak the truth.

How bad has this gotten? From the Daily Wire comes a study from the Journal of Social and Personal Relationships which finds, shockingly, that not a lot of people want to date the trans crowd, and rather than recognize that for the obvious and long-standing truth that it is, the authors see that as bigotry…

Unsurprisingly, 87.5% of those polled said they prefer the first two options depending on which way they swing: Cisgender man or woman, respectively. Non-binary and transgender people were at the bottom and typically were only chosen by people who identified as bi-sexual, gay, or some other type of sexuality. For heteros, the results were other cisgender heteros. The authors find this deeply problematic and believe that attitudes need to change.

“If trans and non-binary people lack access to one of the most stable sources of social support, this could explain some of the existing health disparities within trans communities,” they write. “Looking more closely at the patterns of responses, it also became clear that individuals were least likely to express an interest in dating trans women, even if their sexual identity would otherwise indicate an interest in women (i.e., straight men, lesbian women, or queer/bisexual individuals). Indeed, nearly 20% fewer people indicated an interest in trans women than would have been expected based on the sexual identities of the individuals within the sample.”

The authors also examined participants’ responses in a similar study by the Canadian Psychological Association’s annual convention, which yielded similar results. However, the authors blamed this on several factors outside of nature itself: “Dehumanization/prejudice, uncertainty or lack of knowledge, and issues related to bodies and reproduction.”

“The most common reason for being unwilling to consider dating transgender or non-binary people was that participants felt that they lacked information and understanding of what precisely these kinds of identities mean within the context of dating,” the authors continue. “For example, many simply stated that they had never really considered the question before and were unsure of what it would mean to be in a relationship with a transgender or non-binary individual. Other reasons, however, were less about lacking information, and more about a strong dislike for trans people.”

The authors scold participants for saying transgenders have “make believe” identities or for wanting to date people with whom they could have actual biological children, characterizing their language as “dehumanizing.”

“A minority of individuals mentioned a desire to only date people with whom they could have biologically related children, however, often these reasons were still expressed using dehumanizing language, such as saying that a trans man ‘was not a natural man” or a ‘real man’ and that therefore it would not be possible to have children with him,” they write.

The authors conclude that while they cannot mandate who people should and should not date, they stress that transgenders dating hetero cisgenders should be seen as a sign of progress every bit as much as interracial dating.

“Just as sociologists have tracked acceptance of inter-racial relationships as a metric of overall societal acceptance of racial minorities, future fluctuations in the extent to which trans and non-binary individuals are included within the intimate world of dating may help to illuminate progress (or lack thereof) with respect to fully including trans and non-binary individuals within our society,” they conclude.

So let’s sum this up: normal human beings, a definition which can well include gay people, do not find attractive the prospect of dating someone who can’t tell what gender they are by looking down in the shower. And this fact is a bad thing which must be remedied, apparently starting in the schools, wherein it is forbidden to express the point of view shared by virtually 100 percent of human beings for 99 percent of the time civilization has existed on the subject of gender.

That’s where we are.

Burn the whole thing down.

Interested in more national news? We've got you covered! See More National News
Previous Article Trump: More than 400 miles of the Border Wall will be completed by the end of 2020 [video]
Next Article Trump’s New Slogan, Best Moments From Re-Election Rally