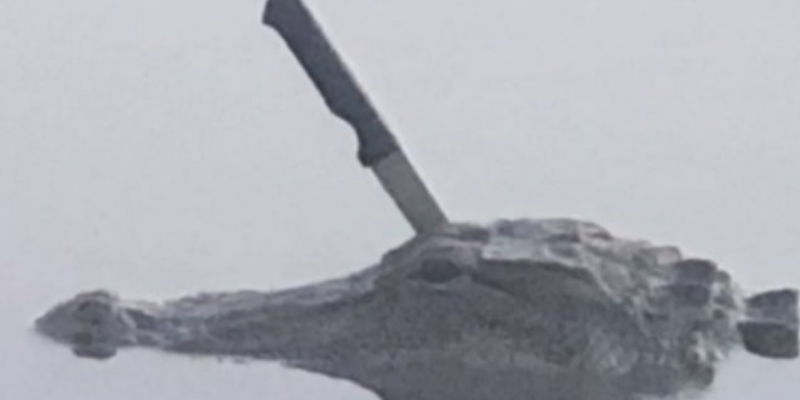 An American alligator swimming in a Sugarland area park outside of Houston appears to have a steak knife in its head in-between its eyes.

Erin Weaver first spotted the gator swimming near her Houston home, and told the local news KTRK, “It looked like a steak knife that was sticking out of his head.”

Weaver has lived in the neighborhood for six years and said she’s never seen them act aggressively or attack, and was worried about why someone would stick a knife in this gator’s head.

“I feel that somebody did this on purpose,” she said. “I want to get help for this alligator.”

A Texas wildlife agency is expected to investigate.

The alligator is hard to kill, even with a knife in its head. Its outer skin is covered in osteoderms, or bony plates similar to a turtle’s shell, which act as bodily armor, according to alligator researcher Frank Mazzotti.

Their skulls are made of heavy, thick bone, which is why any object like a knife getting lodged in its skull won’t kill it.

Still, no one should go near a gator to find out how resilient they are.

These are deadly reptiles and not pets.