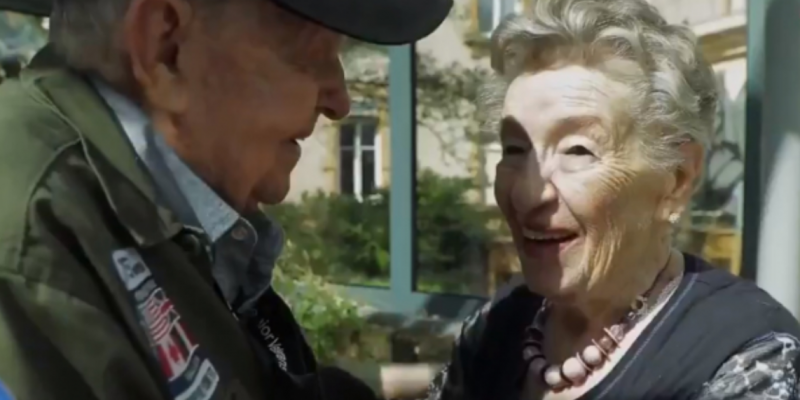 A World War II veteran finally reunited with his long lost love after 75 years, the BBC and other news reported.

K.T. Robbins was a 24-year-old solider stationed in Briey, France, when he first met 18-year-old Jeannine Ganaye. He was unloading cans of lard when Ganaye and two children asked if they could have the leftovers.

“I said great, have them all,”  Robbins recalled. “We didn’t have a place to put them.”

That meeting led to spending three months with Ganaye and her family in her French village.

But Robbins was shipped out in 1944. “After I left, she thought I was coming back,” Robbins said. “She waited for me five years to come back.”

He never returned to her village, until now.

After the war, Robbins returned home to Memphis, went to Ole Miss, married his wife Lillian and bought a hardware store.

“We had a good life together,” Robbins said. “We were married 70 years, but this other thing was still in my heart.”

That other thing (or person) was Jeannine Ganaye.

A local group called Forever Young Veterans heard about Robbins’ story, and arranged for him to go to France for the 75th anniversary of D-Day.

“Greatest day of my life, I reckon,” Robbins said. “It was great.”

Robbins and Ganaye spent two hours together at the French nursing home where she now lives.

“I always loved you,” Robbins told Ganaye, in a video posted by Forever Young Senior Veterans. “You never got out of my heart.”

After waiting five years and hearing nothing, Ganaye moved on withe her life as best she could, and also got married.

Neither ever got over their first love for each other.

Robbins now lives in Olive Branch, Mississippi. He said he invited Ganaye and her children to visit him, and says he doesn’t think their love story is over just yet.

Interested in more national news? We've got you covered! See More National News
Previous Article Fruit fly research, aircraft project among $350B in wasteful spending ID’d in Congressional Pig Book
Next Article SICK: California school has “condom race” for 10-year-old girls to learn how to use them the fastest