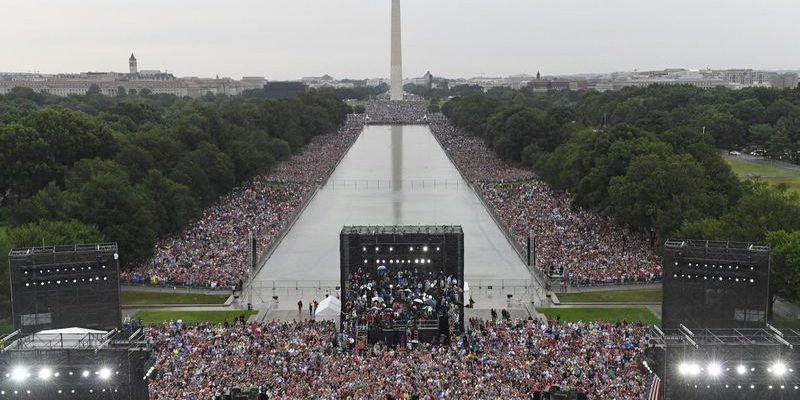 The “Salute to America” Independence Day celebration did not disappoint as thousands packed the National Mall before an impressive speech with several military fly-overs.

The President began by invoking the words of General George Washington who told his troops,

“The fate of unborn millions will now depend, under God, on the courage and conduct of this army. We have therefore but to conquer or die.”

Trump continued, “That same American spirit that emboldened our founders has kept us strong throughout our history. To this day, that spirit runs through the veins of every American. That same righteous spirit forged our glorious Constitution…”

The President praised the historical leadership of the United States from western exploration to civil rights, space exploration, music, medical research, and more.

He paid tribute to the Coast Guard by invoking its founding:

“In August of 1790, by request of George Washington and Alexander Hamilton, Congress established a fleet of ten swift vessels to defend our shores… they are the ancestors of the U.S. Coast Guard.” *applause*

POTUS went on to highlight the Coast Guard’s role in the War of 1812, when “The Star Spangled Banner” was written. He also praised their bravery during World War II in amphibious landings in the Pacific.

He concluded, “When their chopper blades grace the sky, our friends know help is on the way and our enemies know their time has come… Semper Paratus. They are always ready. They are the United States Coast Guard.”

The Air Force was up next, praised by the President for their tenacity during World War II:

“As Roosevelt said, the Nazis built a fortress around Europe but they forgot to put a roof on it… We crushed them from the air. More than 300 airmen gave their lives to destroy the enemies oil refineries…”

Trump declared, “For 65 years, no enemy air force has managed to kill a single American soldier because the skies belong to the United States of America.” *applause*

“When demanded to surrender, he very famously declared, ‘I have not yet begun to fight!’” *applause* “When our navy begins fighting, they finish the job…”

He continued, “It was US Aviators launched from the carrier Enterprise who filled the skies of Midway during the Pacific War. No one could beat us or even come close… It was the Navy SEALs who delivered vengeance on the terrorists who planned the September 11th.”

Now it was the Marines’ turn:

Last but not least, the US Army, of which the President told the story of Alvin York:

“…faced an inferno of enemy fire and refused to retreat… he shot his rifle 18 times, killing 18 of the enemy. Once they fixed bayonets and charged, he killed seven more. The entire German machine gun battalion surrendered because of Alvin York.”

He continued, “A generation later, the Army returned to Europe and embarked upon the great crusade… they scaled the cliffs of Normandy… nearly 250 years ago, a volunteer army of farmers, blacksmiths, militiamen, risked life and limb to secure liberty and self-government.”

President Trump concluded, “We will always be the people who defeated a tyrant… We are Americans. And the future belongs to us. The spirit of American independence will never fade, but will reign for ever and ever.” *applause*