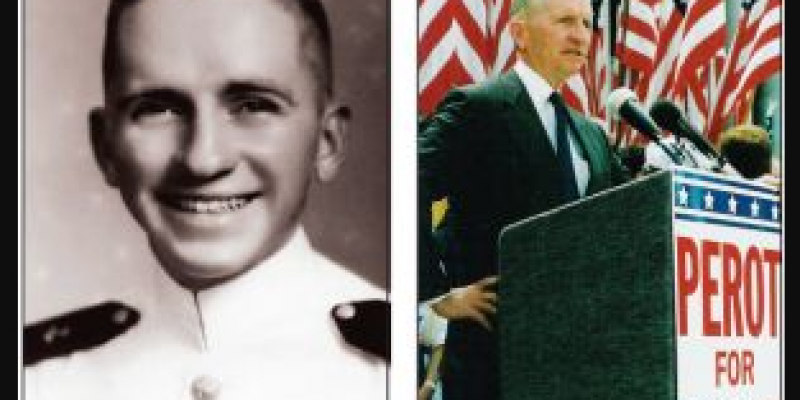 Before Perot ran for president in 1992 and 1996, he pioneered the computer services industry and founded Electronic Data Systems Corp. (EDS) in 1962.

Forbes estimated Perot’s wealth at $4.1 billion, making him the 478th-richest person in world.

Perot started his empire on his 32nd birthday as a one-man company financed by borrowing $1,000 borrowed from his wife.

Perot became a multimillionaire when he took EDS public in 1968 and a billionaire in 1984 when General Motors Corp. bought EDS for nearly $2.6 billion.

In 1986, Perot received the Winston Churchill Award for epitomizing the spirit of Britain’s most famous statesman. He was only the third American to receive the coveted medallion, honored for his efforts on behalf of American POWs in Vietnam in the 1960s and for organizing a strike team that rescued two of his EDS employees from an Iranian prison in 1979.

Perot personally oversaw the mission, flying to Tehran during the planning phase and greeting the rescued employees and raiders when they arrived in Istanbul.

That daring rescue became the basis for Ken Follett’s 1983 nonfiction thriller, On Wings of Eagles. NBC later made a TV miniseries about the mission.

Prince Charles and first lady Nancy Reagan came to Dallas to bestow the Churchill medal. It was one of Perot’s fondest memories.

Orson Swindle, who shared a cell with Sen. John McCain in North Vietnam, said Perot was “one of the most truly patriotic Americans” he’d ever met. “His affinity for veterans and people who serve the country was beyond description. He was brilliant. He had instincts that defied imagination.”

Ross Perot was the third child of Lulu May Ray and Gabriel Ross Perot, born in Texarkana in 1930.

Named Henry Ray after his maternal grandfather Perot later changed his middle name in his early teens after his father.

Perot attended Texarkana College and entered the U.S. Naval Academy in 1949 at age 19.

He met his wife Margot on a blind date when he was a midshipman.

In his autobiography, Ross Perot: My Life & the Principles for Success, he wrote that he was given several pairs of shoes and a dozen underwear after he was sworn in as a midshipman.

He had never owned more than one pair of shoes and three or four sets of underwear at the same time in his life.

“This was possibly my first example of government waste,” he wrote.

“Describe my father?” Ross Perot Jr., his only son and CEO of the Perot Group, asked in an interview with Dallas News. “Obviously a great family man, wonderful father. But at the end of the day, he was a wonderful humanitarian.

“Every day he came to work trying to figure out how he could help somebody.”

Perot celebrated his 89th birthday in June before his death on July 9, 2019.

When Perot was asked in 2016 what he wanted to be remembered for, he shook off the question with: “Aw, I don’t worry about that.”

That interview with The News would be his last. His parting words: “Texas born. Texas bred. When I die, I’ll be Texas dead. Ha!”

Perot is survived by his wife, Margot, their five children and spouses, and 16 grandchildren.

Interested in more news from Texas? We've got you covered! See More Texas News
Previous Article APPEL: There Is No Good Reason For The Democrat Love-Fest In The Black Community
Next Article It’s Starting To Look Like The 5th Circuit Will Kill Obamacare…