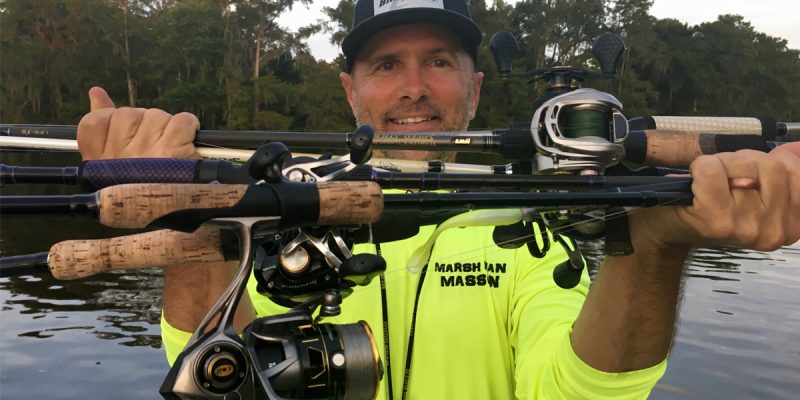 In a survival situation, parachute cord tied to a stick on one end and a hook fashioned from bone on the other could deliver a meal that would sustain you for days. But that doesn’t mean there aren’t more efficient ways to catch fish.

Imbued with the marvels of modern technology, rods and reels have evolved to the point that anglers willing to spend just a little bit of money have an incredible advantage over those who pick up their gear in the bargain bin of a big-box store.

I get asked constantly — probably more than any other question — what gear I use for which situation, and why. In this video, I take viewers through my arsenal. It’s not exhaustive, since I frequently leave rods and reels at home that apply to very specific situations I don’t expect to encounter on most trips. But in this video are the six rods and reels that are always strapped on the bow of my boat whenever I venture into the marsh in search of speckled trout, redfish and largemouth bass.

Many anglers claim to catch just as many fish on bargain-bin gear as fishermen using higher-end stuff, and to them, I tip my cap. I just know I’m not good enough to do so. I’ve used cheap stuff, and invariably end up wanting to snap it over my knee, knowing how many fish it has cost me.

My fishing arsenal is constantly evolving, but this is a snapshot of the gear I’m using now, and why I think it give me an advantage.

Like the video? Please give it a thumbs-up, and subscribe to the Marsh Man Masson channel on YouTube. Also, leave a comment below or on the YouTube page. How many rods and reels do you take with you on each fishing trip? Which setups are your favorites? What do you like about them?