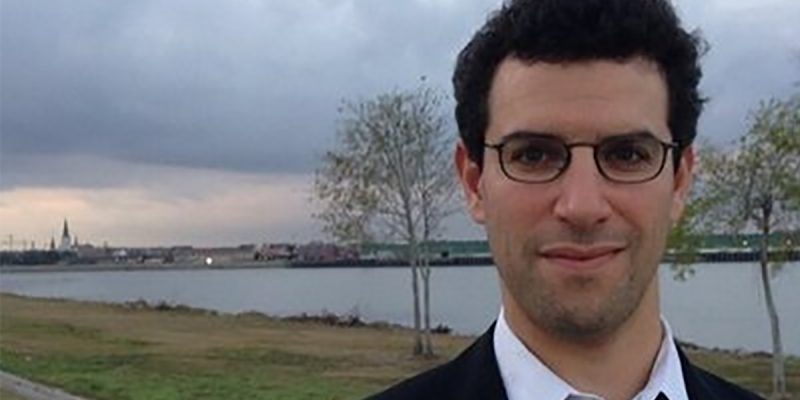 That’s really the only takeaway we had after reading a rather whiny op-ed posted at the New York Times by someone named Andy Horowitz, who is an assistant history professor at Tulane and most certainly not a New Orleans native, about how he evacuated his home in Algiers in advance of Hurricane Barry.

We don’t suggest reading the whole thing. All that matters in this piece is here…

JACKSON, Miss. — Before I left New Orleans on Thursday, in advance of Hurricane Barry, I put a photograph of my grandmother’s family, taken before World War II, into a waterproof bag. I wrote my phone number in permanent marker on the outside, tied it to a life preserver along with a few other things I couldn’t bear to lose and put them in the attic. I trust they will be there when I return home on Monday.

It’s a family photograph. Put it in the car with you if you’re so afraid of losing it.

Hurricane Barry wasn’t the Big One, thankfully. But it was a reminder that, in our precarious state, it wouldn’t take an especially big storm to cause big trouble. Any combination of circumstances that once seemed unlikely — a river that stays high into the summer, for example, when a hurricane comes — could reorient our future.

The Mississippi has been high in July before. There is nothing particularly new or different about that. And we’ve already discussed here at the site part of the reason why the river is high – it hasn’t been dredged often enough to maintain its depth at a level those levees were built for. In other words, it’s an engineering problem which was actually addressed by legislation Congress passed last year. Clearly what Horowitz is going for, though he doesn’t say it, is that global warming has made the river high.

We’re two paragraphs in and this thing is already tired.

Living with that knowledge has already reoriented our present.

On Wednesday, a regular summer rainstorm flooded my street, causing my wife, well into her third trimester, to miss a doctor’s appointment. The internet told us that a drop in barometric pressure could send her into labor.

Umm, OK. By the way, one of the reasons your street floods during regular summer rainstorms is that the Sewerage and Water Board doesn’t regularly clean the storm drains around the city. Jefferson Parish next door, which gets exactly the same weather New Orleans does, regularly cleans its drains and, consequently, very rarely gets heavy flooding from ordinary rainstorms.

The National Weather Service predicted that Hurricane Barry’s storm surge could push the Mississippi River up to 20 feet. That’s higher than the levee in parts of our neighborhood, Algiers.

So you’ll know, Andy, the National Weather Service and the national weather media are what’s known as storm pimps, and their predictions of the effects of hurricanes and tropical storms are almost always comically overblown – which is precisely what was the case with Hurricane Barry, the most overhyped weather system we’ve seen in a long time.

Later that day, a spokesman for the Army Corps of Engineers announced that the National Levee Database had erroneous information, and that the levees might in fact be “eight-tenths of a foot” taller than reported. It struck me as absurd that the federal agency was measuring its own inaccuracies in tenths of a foot, rather than inches. We put an infant car seat in the trunk, just in case, and headed north.

This is what you get from a history professor, apparently. Horowitz isn’t aware that the use of tenths of a foot or inch is exceedingly common in engineering parlance throughout the United States, and the U.S. Army Corps of Engineers is, not surprisingly, made up of American engineers. There is nothing whatsoever absurd about that – decimalizing the units of measurement makes the math easier, and engineers do lots of math.

We watched the news from a rented apartment in Jackson, where a friend’s sister-in-law, whom we had never met, volunteered to be on standby to watch our daughter if my wife went into labor. We were comforted by the coincidence that two evacuees from New Orleans, a nurse and a doula, occupied the other half of the duplex.

Not to be alarmists here, or anything, but it might actually be safer in New Orleans in the event of a hurricane than in Jackson without one.

Most of the national news was blustery as usual, breathlessly reporting on the sort of street flooding we have had to learn to take for granted. The local news, in contrast, was defensive, asserting everything was fine, before they could be sure it would be. And I still haven’t heard much about the rest of the region. We didn’t regret our decision to leave; my risk tolerance is high enough to live in New Orleans, but not high enough to tough out a tropical storm.

Actually, his risk tolerance isn’t high enough to live in New Orleans. Toughing out tropical storms is something New Orleanians do practically every year. It’s the Cat 3 hurricanes and up which necessitate an evacuation. Horowitz would be better off somewhere tropical storms are unlikely to strike.

Connecticut, for instance, or New Jersey.

It seems now that we would have been O.K. if we had stayed. We cheered on Saturday as the city caught two breaks: the storm tracked west, and dumped a lot of rain just offshore.

New Orleans survived Katrina, though it took a whole lot of damage and needed a giant pile of federal dollars to make that comeback. That this guy thinks of a glorified tropical storm with a three-foot storm surge and maximum winds of 75 miles an hour as a “bullet” makes it clear he’s not built sturdily enough for life in the Big Easy.

We cannot assume that will always be the case, though. And living with that knowledge takes its toll. By my count, like many places, we are now entering a late round in a national civic game of Russian roulette.

Exactly what does that mean? And what toll is he talking about? You live on the Gulf Coast, you know you’re susceptible to having a hurricane passing overhead. Millions of people have known this forever and still choose to live here because we think the juice is worth the squeeze. And there is nothing new about that. A run-of-the-mill bout of tropical weather has this guy babbling about civic Russian roulette?

When people praise Louisiana’s resilience, they should remember that its lived experience includes, for example: my neighbor who keeps a month’s worth of drinking water stored in his house; my friends uptown, who had the means to leave, and would have, if they hadn’t needed to weigh the trip against traveling with a week-old baby boy; and the man in the Lower Ninth Ward who told a reporter that he had spent Friday night sleeping in his attic with a chain saw, in case the water came again and he had to cut his way out of the roof.

In New Orleans, this is “the new normal.” The phrase often refers to meteorology: more rain, more drought, more fire, less predictability. It was once a truism among scholars that disasters are “not like the crises of everyday life.”

It’s not a new normal, it’s an ancient normal. What’s new is this guy living in New Orleans rather than New Haven.

Before Katrina everybody who lived in New Orleans talked forever about Betsy and Camille, which hit the city in 1965 and 1969, respectively. Betsy killed 81 people. Camille killed 335 people. And before those two monster storms there was the Hurricane of 1947…

The Hurricane of 1947 made landfall near the Chandeleur Islands of Louisiana on September 19th.  Wind gusts of 112 miles per hour and a central pressure of 967 millibars (mb) were measured at what is now New Orleans International Airport, which was less than 2 meters (6.5 feet) of water.  A storm surge of 3 meters (9.8 ft.) reached the bayou village of Shell Beach, which is a 40-minute drive southeast of the city (Yamazaki, 2002).  It’s significant to note that old Shell Beach now lies beneath five feet of water due to wetlands loss caused by the Mississippi Gulf River Outlet, which was constructed in 1968 (Bourne).  The 1947 Hurricane claimed 51 lives, flooded Jefferson Parish to a depth of 1 meter (3.28 ft), and caused 100 million dollars of damage in New Orleans.   Levees along the south shore of Lake Pontchartrain to protect Orleans and Jefferson parishes were built in response to the destruction.

This has been going on since there was a New Orleans. But according to the professor, who’s lived here for five damned minutes, it’s all changed and Life Is Really Complicated, You Guys.

But the lines are blurred now: Can we afford to make the trip? Who will care for our child if we have to go to the hospital? Will our insurance cover an out-of-state delivery? Wouldn’t it be simpler just to store our old photographs in a waterproof box? These are not questions about the Big One. They are the banalities of life in a changed climate.

No, they’re the banalities of life, period.

When you live in a hurricane zone you’re supposed to have a plan for protecting your stuff in the event of a flood. Everybody knows this except for overeducated dunces who, like children, think the world revolves around them. Everybody who grew up in New Orleans is familiar with how to make a plan for hurricane season.

So you’ll know, Andy, that’s also true of everybody who grew up in Houston, the Mississippi Gulf Coast, Mobile, the entire state of Florida, coastal Georgia and coastal North and South Carolina. We’ve all dealt with hurricanes and we all know what we’re going to do in the event one shows up on our doorstep.

“The moment becomes a season,” my teacher, the sociologist Kai Erikson wrote in 1995, “the event becomes a condition.” Off the Windward Islands in the Atlantic Ocean, another storm is forming.

This guy’s bio says he’s writing a book about Hurricane Katrina, as though that’s never been done before. And boy, will this thing contain a lot of new information…

Andy’s current book project, Katrina: A History, ​1915-2015, will be published by Harvard University Press in 2020. The book means to offer the definitive history of Katrina while exploring the questions the disaster gives rise to about ​race, class, community, trauma, inequality, the welfare state, urban and suburban development, extractive industry, and environmental change.

What he ought to do is write a book about how people who can’t handle a little risk in their lives shouldn’t attempt to lecture the rest of us about the end of the world.

This is the kind of low-grade whingeing which makes so many of us despise millennials, and millennial academics in particular. He acts like he has some special insight on the world the rest of us haven’t considered, when in fact he’s not even in command of basic facts and context surrounding the things he sees.

Just write your damn book and move on to a job at some other overpriced college. We certainly won’t miss you or your fretting about photographs and evacuee day care.