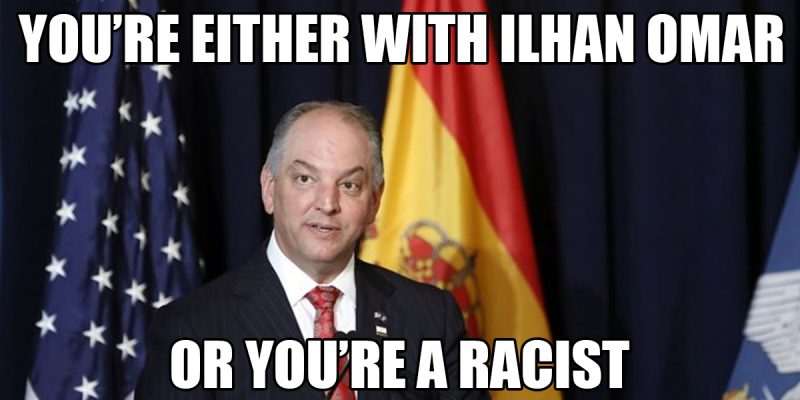 A major theme we’ve noted all week long, particularly here in Louisiana with the laughable controversy over Sen. Conrad Appel’s questioning of monolithic black support for the Democrat Party, is the growing recognition a large chunk of the American Left is so unhinged on the issue of race that they believe anything white people say about “people of color” is evidence of racism.

Clearly that informs the reaction to President Donald Trump’s criticisms of The Squad, the foursome of Democrat congresswomen which includes the sinister anti-Semite and probably criminal Ilhan Omar. Trump never mentioned race in his criticisms, particularly of Omar, but racism was imputed to him by the media and by the Democrats in Congress; the House voted mostly along party lines to censure Trump as a racist for having said what he said.

Louisiana’s Democrat governor John Bel Edwards, pandering to his base, joined those criticisms earlier this week. Edwards likened Trump to segregationists denying blacks access to lunch counters in days of yore, which will inevitably lead to examinations of the governor’s ancestry and his family’s history of race relations through their political domination of Tangipahoa Parish over the past century.

But the most potent example has been the bizarre controversy over Appel’s Facebook post and Hayride column, which noted that (1) the black share of the American population is on a stagnant trend, (2) the Democrat Party which the vast majority of black voters support is actively attempting to import a new electorate into the country via open borders immigration policies, (3) the demographic consequences of such policies will inevitably dilute black voting strength, (4) the gains made by blacks in sectors like politics, culture and business will inevitably be challenged by the new immigrants as they arrive and (5) the long-term effect of supporting the party putting this process in motion is decidedly negative to the black community.

Appel is apparently a racist for having made those statements, despite the fact they progress from simple common sense and don’t express a negative or hostile view of black people at all other than to question whether collective choices made by black voters will produce the effect they presumably seek.

And most recently for his trouble he’s been castigated by the lunatic Stephanie Grace of the Advocate’s editorial page after Grace was given her cue by Congressional Black Caucus chair and New Orleans Democrat congressman Cedric Richmond, whose own history on the question of race is far from clean.

What underlies all this, though? Rasmussen Reports, in a poll released on Wednesday, lets us know. The Washington Times’ Cheryl Chumley puts this in perfect perspective…

In what has to be one of the most interesting polls of the day, Rasmussen Reports finds that “one-in-three Democrats think it’s racism any time a white politician criticizes a politician of color.”

Think what that means.

White politicians can’t say a word against black politicians, Hispanic politicians, Asian politicians — any politician with a skin color that deviates from white — without being accused of racism, according to about a third of Democrats.

Without being guilty of being racist, that is.

The actual survey question went like this: “Is it racist for a white politician to criticize the political views of a politician of color?”

And in a national survey of 1,000 U.S. likely voters, conducted between July 15 and July 16, and with a margin of error of plus/minus three percentage points, “32% of Democrats” say yes, according to Rasmussen.

That’s racism in itself.

Still, those survey numbers explain much — namely, why every time a conservative criticizes the policies of the hard left, the progressive left, the little-more-than-socialist left, it’s always the favorite response of liberals to cry “racism.”

Tossing down the race card as a means of stifling dissenting views — it’s no longer just anecdotal, or a figment of imaginations, or conspiratorial and hallucinatory to suggest this is a favored tactic of many on the far left.

Now we have the polling numbers to prove it. A third of Democrats actually believe they’re justified in crying racism whenever a white politician disagrees with a politician of color.

That 32 percent is the number of people who will come out and tell a pollster they believe white folks don’t have the right to criticize people who aren’t white. It’s not a bad bet that the real number is higher.

And given that so many people believe something so obviously unreasonable and ridiculous, while charges of “Racism!” are spread around like Easter eggs, it’s time to question whether (1) the charge carries any real weight anymore or (2) it shouldn’t be immediately discarded as the desperate attempt to shut down a discussion.

The Rasmussen survey found that by a 49-47 margin, respondents thought it was more likely that the “racism” charge was being hurled at Trump in a naked attempt for political advantage rather than that the president is actually racist.

The guess here is that margin will only grow. Fake controversies like the one befalling Appel this week won’t long withstand sunlight, and the public is getting tired of constantly being whipsawed by the Left’s racial pyromaniacs.