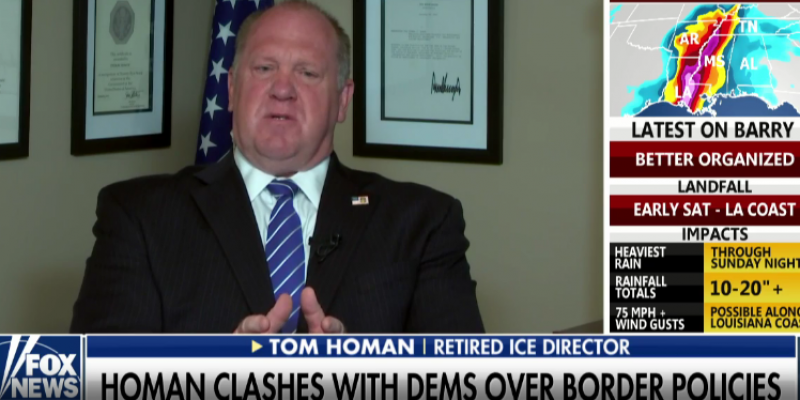 “What is going on in this country right now, especially on Capitol Hill, is nothing short of deceitful behavior which intentionally distorts the truth in order to win a political battle,” Tom Homan writes at Fox News.

I saw it firsthand when I testified on Capitol Hill this past Friday, in front of the House Committee on Oversight and Reform.  Aside from the six minutes I was given to read my opening statement, there was an attempt by most  Democrats on that committee to silence me.

The issues surrounding zero tolerance and the conditions of confinement at Border Patrol stations is an important one and it is vital that the American people know the facts. But every time one of the witnesses or members of Congress said something that was downright wrong – a lie, an intentional mis-truth – and I attempted to speak up and correct the record, I was refused many times the opportunity to speak.

He adds that he refuses to be bullied, and will not be silenced in his support of the Border Patrol and ICE.

He also point to the criminal acts of Nancy Pelosi as Speaker of the House who is providing instruction for illegal aliens how to avoid being removed from the U.S. after a federal judge ordered their removal through due process.

“Since when is that appropriate?” he asks. “What other laws can we ignore?  What other law enforcement officers should we evade?  Can I ignore the tax law and not pay my taxes?”

Democratic leaders nationwide are doing the same thing, which he argues will put the public in more danger, put ICE agents in more danger, and will lead to violence and death.

Homan talks about his recent experience sitting before legislators on Capitol Hill.

“Who pays the price for all these lies?” Homan asks. “The American people – who will be less safe if ICE isn’t allowed to do their jobs to arrest, detain and remove those that the law says MUST be removed.”