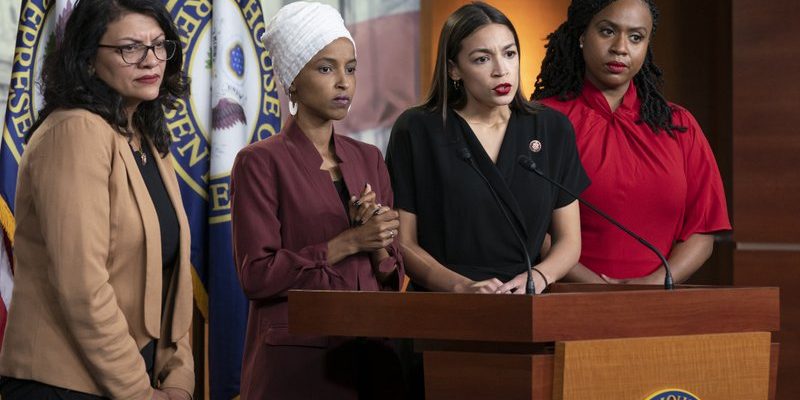 Political theatre is a good way to describe the drama unfolding between President Trump, Speaker Nancy Pelosi (D-CA), and four “radical” Democrats in the U.S. House of Representatives.

When President Trump was asked about the comments, he found himself in the unusual position of defending his oft critical rival Nancy Pelosi saying,

The friction hit a fever-pitch when President Trump tweeted,

“Why don’t they go back and help fix the totally broken and crime infested places from which they came. Then come back and show us how it is done…”

Democrats quickly accused the President’s tweet of being openly racist, honing in on the phrase “go back to where they came from” as if Trump was referring to immigrants at-large.

US Representatives Ilhan Omar (D-MN), Alexandria Ocasio-Cortez, Rashida Tlaib (D-MI), and Ayanna Pressley (D-MA) held a press conference in which they alleged the tweet was only the most recent racist remark while calling for President Trump’s impeachment.

Rep. Ilhan Omar accused the President of, “openly violating the oath he took to the Constitution of the United States and the core values we aspire to.”

“I am not surprised that he uses the rhetoric that he does when he violates international human rights and takes thousands of children away from their families.”

Last to speak, Rep. Tlaib accused President Trump of continuing, “his racist and xenophobic playbook”, adding that “many members of Congress have called for his impeachment… I urge House leadership to take action.. to impeach this lawless President today.”

President Trump doubled down on his position via Twitter:

“So sad to see the Democrats sticking up for people who speak so badly of our Country and who, in addition, hate Israel with a true and unbridled passion. Whenever confronted, they call their adversaries, including Nancy Pelosi, “RACIST.” If Democrats want to unite around the foul language & racist hatred spewed from the mouths and actions of these very unpopular & unrepresentative Congresswomen, it will be interesting to see how it plays out.”

The President further “dug-in his heels” on Monday morning by quoting Sen. Lindsey Graham (R-NC) in a weekend tweet saying in-part, “We all know that AOC and this crowd are a bunch of Communists…”

President Trump put it simply when pressed by the media on Monday,

“As far as I’m concerned, if you hate our country.. If you’re not happy here, you can leave!”