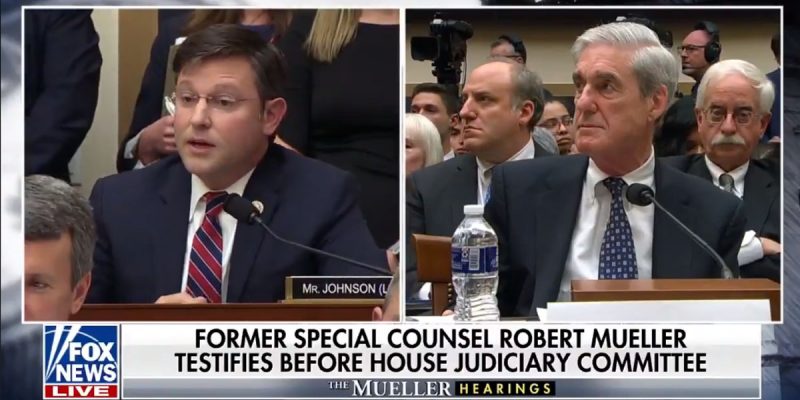 If you haven’t seen this, which is arguably the highlight of Wednesday’s congressional hearings at which Robert Mueller gave testimony to the House Judiciary Committee regarding his report about the Trump-Russia “scandal,” here is your chance. It’s the five minutes Rep. Mike Johnson (R-Bossier City) took to summarize Mueller’s testimony and offer the Republican critique of his investigation, and it is brilliant…and devastating.

Here’s the video of Johnson, and below we’ll have some further commentary…

By now we don’t have to go through what you already know, which is that Mueller’s testimony was an unmitigated disaster for the Democrats. Mueller appeared doddering and disengaged, and it was fairly clear he was more of a figurehead as the special counsel to investigate the Trump-Russia allegations than actually in charge of the investigation. If it wasn’t in the report, as Mueller said time and time again during the testimony, he had nothing to say about it. The most obvious reason that would be the case was that Mueller wasn’t involved in any of the day-to-day work of his operation.

And as Johnson noted, that’s where this thing really became sinister – because Mueller, who though a swamp creature from tip to toe, is nominally a Republican. Nobody else conducting that investigation was. There were fourteen Democrats who had contributed a large amount of money to Hillary Clinton, and they were very much a rogue’s gallery of political opportunists and true believers. It’s lately been suggested that the real power behind Mueller’s investigation was Andrew Weissmann, a federal prosecutor with an abominable record of abuse. From Kenneth Timmerman’s expose’ of Weissman at FrontPage Mag today…

Weissmann is best known for wildly famous cases of prosecutorial overreach, including his overturned prosecution of Enron officials and the auditing firm Arthur Andersen LLP, which destroyed both firms and put over 100,000 people out of work.

Defense Attorney Sidney Powell, in her 2014 book Licensed to Lie, accuses Weissmann of suborning perjury, something that multiple witnesses in the (newly renamed) Weissman witch hunt have also accused him of doing.

Similarly, The Hill’s John Solomon recently revealed that Weissmann reached out to the U.S. lawyers of Ukrainian oligarch Dimitry Firtash early on during the probe in another attempt to suborn perjury. “Give us some dirt on Donald Trump in the Russia case, and Team Mueller might make his 2014 U.S. criminal charges go away,” they said in effect, Solomon wrote.

According to Solomon’s account, Weissmann gave specific instructions to Firtash’s legal team on what lies their client should tell the Special Counsel.

If these tales of attempts to suborn perjury are accurate, Andrew Weissmann should be indicted and sent to jail.

But while jailing Weissmann might provide solace to Jerome Corsi and others who have been wronged by his prosecutorial misconduct, by the time that happens the political damage will have been done.

And that’s the point. Weissmann and his team of partisan Democrat lawyers wrote this entire 448 page report with one goal in mind: to provide a roadmap to Democrats in Congress for the impeachment of President Trump.

If you don’t believe that, just tune into any show on MSNBC or CNN. That’s all they’ve been talking about since Mueller’s testimony.

As Johnson noted we know that Mueller’s entire investigation was started because of the Fusion GPS-purchased Steele memo, which was also used to justify the Obama administration’s spying on American citizens in a gross abuse of civil rights. Mueller pretended he didn’t know who Fusion GPS or Christopher Steele were, and he also pretended not to know the nexus between their work for the Hillary Clinton campaign and his being pressed back into service. But Weissmann surely knew.

And this entire debacle has now been laid bare as the attempted coup by the Democrat Party it always had been. All that’s left is for the people involved to admit what they’ve done.

Which is not forthcoming. But what is forthcoming is the Inspector General’s report detailing this fiasco – from the abuse of the FISA process to the ratcheting-up of the Steele dossier into the Mueller report, to the misuse of the nation’s law enforcement and intelligence apparatus for political purposes by the Obama administration (Messrs. Brennan and Clapper most prominently will play a part in that story) and the Clinton campaign.

We are talking about Washington, DC, after all, so it would be too optimistic to say that the entire house of cards will be coming down. But a reckoning is coming. One way or another, it’s coming.

Interested in more national news? We've got you covered! See More National News
Previous Article APPEL: The Democrats’ Trump-Russia Party Is Over
Next Article Help Us Stop The Louisiana Board Of Pardons From Letting A Vicious Murderer Go Free