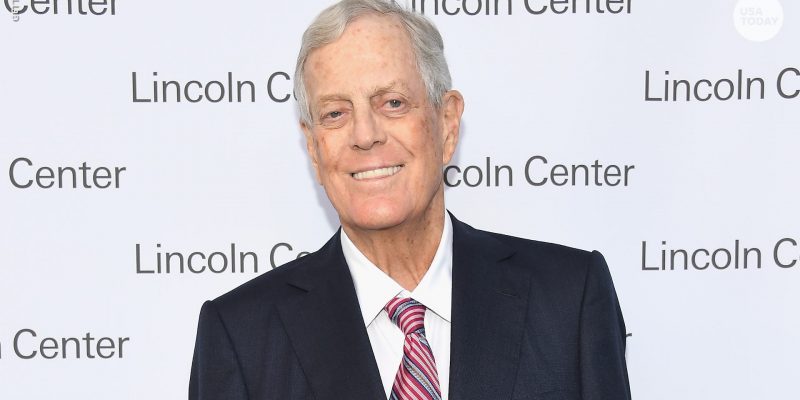 Friday brought sad news to freedom-loving Americans when the news broke that conservative businessman and philanthropist David Koch, 79, had passed away.

In a public statement David’s brother Charles Koch said, “It is with a heavy heart that I announce the passing of my brother David.”

The two brothers built America’s second largest company, Koch Industries, and brought together many wealthy conservative donors by rallying them behind the principles of free market economics.

According to Forbes, David and Charles were tied at the time of his death for the spot as the world’s 11th richest man.

They also founded the non-profit organization Americans for Prosperity which has a 50-state operation that advocates for less government spending and taxation. The group has spent more than $1 billion over the last several years supporting fiscally conservative candidates for office.

“He and his brother have done more than anybody to fund climate science deniers for decades. So f— him, the Amazon is burning up, I’m glad he’s dead, and I hope the end was painful.”

David Koch should be remembered for what he was, a patriot and a man who cared deeply about his fellow man. He donated roughly $1.3 billion to charity, cancer research, and the arts.

He was a cancer survivor, defying the odds by turning a five-year death sentence into a 27-year marathon.

David also survived a plane crash in 1991 when two planes collided at LAX, killing 33 passengers. He reflected on this as a transformative moment in his life during an interview with Barbara Walters on ABC saying,

“I was amazed I survived the accident, I felt the good lord was sitting on my shoulders and helped save my life because he wanted me to do good works and be a good citizen.”

David Koch is survived by his wife Julia and their three children.

“While we mourn the loss of our hero, we remember his iconic laughter, insatiable curiosity, and gentle heart.” – Julia Koch