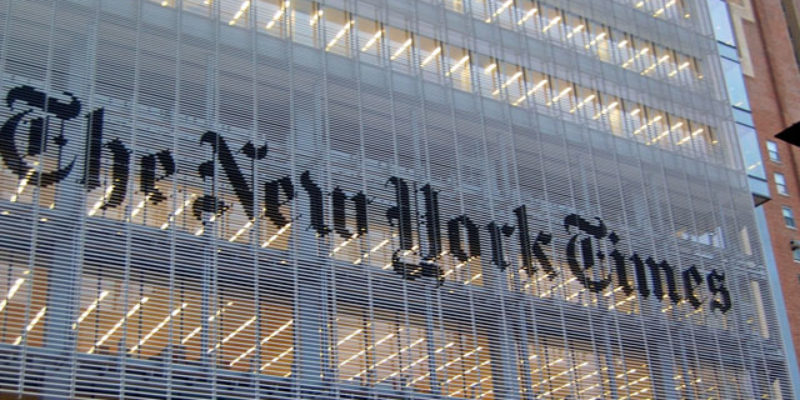 This weekend, The New York Times debuted the 1619 Project, which is a look at the impact of slavery on America 400 years after the first slaves arrived in the British colonies. It’s important to study slavery in America because it is a dark chapter in American history that has certainly had impacts today. But to the surprise of no one who has paid attention to the Times lately, it has descended into a hacktastic project of historical revisionism in service of the far left.

The project began by claiming that American capitalism was the result of slavery. Phil Magness at the American Institute for Economic Research illustrates how it is nonsense.

Then the project tried to claim that the Senate filibuster and Republican use of the filibuster to oppose Barack Obama was tied to slavery. John Davidson blows that apart at The Federalist.

Davidson also blows apart another essay in the series, one that claimed the American Founders fought the Revolution explicitly to defend slavery.

For example, the essay that launches the project, by Nikole Hannah-Jones, is premised on a series of false assertions about the American Founding, including that the Revolution was fought to protect slavery, that the British Empire was turning against slavery in the eighteenth century, and that the American Founders consciously disbelieved the ideals they espoused. Historically speaking, there’s no evidence for any of that.

She argues persuasively that African-Americans are the true believers in America’s Founding ideals, but also that they are dupes because the ideals are a lie—a view thoroughly refuted by the likes of Frederick Douglass and Martin Luther King, Jr., who understood the principles of the Founding as a “promissory note to which every American was to fall heir.”

Why is the New York Times going down this road? Damon Linker, who himself is a man of the left, explains why:

And the 1619 Project is all about advancing a radical political agenda. The message it aims to convey is clear: The United States is and always has been, from its very origin, a racist country infected by a white supremacist ideology that has birthed and nurtured institutions and systems — from Congress to capitalism — that systematically disadvantage black Americans. Political actors of the present have a simple choice: They can either embrace (invariably left-liberal or socialist) policies that will begin the process of dismantling these pervasive forms of structural injustice — or they can oppose doing so and ensure that the injustices continue, with toxic racism remaining where it has been for the past four centuries, at the very center of American life. Those are the choices.

If America is fundamentally and irredeemably evil, there is only one choice: revolution. This is what the left is trying to force.

America is an imperfect nation and our Founders were flawed human beings, like all people. But the ideals of the nation they founded allowed us to address our Founding sin and sacrifice over 600,000 Americans to end slavery. While there is still much to do in the areas of racial equality, we have made substantial progress over the past 400 years. That has to be included in any treatment of slavery.

Also, the Washington Free Beacon had an excellent writeup of the gun control proposals supported by Democrats. It also included whether or not those proposals actually would work or not. I’m sure you’ll be shocked to know that most of the proposals would be ineffective.

There was an excellent article in the Wall Street Journal ($$$) that argues libertarian-minded free marketeers have taken social conservatives for granted. They have failed to respect them and that’s why some conservatives have become skeptical of capitalism. I agree.

Interested in more national news? We've got you covered! See More National News
Previous Article Texas ranks 31st highest on beer taxes
Next Article Why is no one investigating O’Rourke the ‘hacker’ who fantasized about killing children?