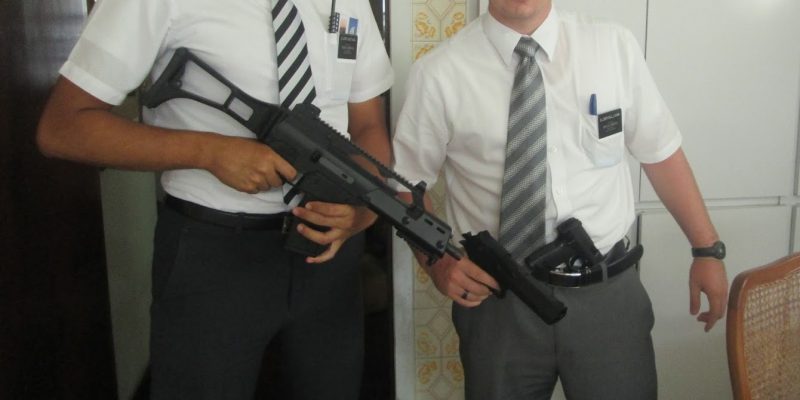 We’ve heard of disputes over packing heat in church before.

Following the Sutherland Springs shooting, the largest American Protestant denomination started encouraging concealed carry classes for members and ministers. And soon a Texas law followed allowing attendees to carry firearms in houses of worship by default, though churches may opt out with written or oral notice.

According to the Pew Research Center, a majority of white evangelicals who own a handgun carry it with them at all places including church (65%, versus 57% of all gun owners) because they view it as a safety precaution. They are more likely than other religious Americans to believe most places should allow carrying.

Post Charleston, declining Mainline-liberal churches began posting legal disclaimers to their doors (required by the state of Texas, at least) asserting their houses of worship as (they hope) gun-free zones.

But now one of the most solidly conservative sects in the United States — known for abstinence from caffeine, modest dress, and other counter-counter-cultural practices derived from its 19th Century Holiness Movement influences — is banning guns outright in Sunday meetings.

The Southwestern U.S. authorities of the Church of Jesus Christ of Latter Day Saints issued the following rule, effective Sept. 1, in lieu of placing legally required notices on doors. In other words, church law over secular law. And this appears to be a rule issued to other jurisdictions as well.

“As of September 1, 2019, Texas law will permit the carrying of open and concealed weapons in places of worship unless a person is notified that it is prohibited. The Handbook states: “Churches are dedicated for the worship of God and as havens from the cares and concerns of the world. With the exception of current law enforcement officers, the carrying of lethal weapons on Church property, concealed or otherwise, is prohibited” (Handbook 1, 8.4.5; Handbook 2: Administering the Church [2019], 21.2.4). This announcement constitutes effective notice that it is not permissible to enter the premises of Latter-day Saint buildings with open or concealed weapons except as permitted by the Church’s policy.”

I find it offensive and unChristian that ANY church leader would prefer that their sheep be defenseless and senselessly slaughtered for some greater good. Changes in the Church handbook state that “[c]hurches are dedicated for the worship of God and as havens from the cares and concerns of the world.” That sounds great on paper, but do you think the people that want to murder us care what churches are dedicated for? Do you think Devin Patrick Kelley cared that the First Baptist Church of Sutherland Springs was “dedicated for the worship of God?” Thank the Lord that Stephen Williford was able to engage with the shooter and stop him from killing more people than he had already slaughtered! (Read more.)

Grisham noted that in 2010, a gunman entered an LDS church building in Visalia, Calif., killing the bishop.

From the hip: While Texas law clearly allows for the carrying of handguns inside church-buildings as public spaces, there is nothing preventing a denomination or association of churches from issuing its own rules. And as stated above, the new law allows churches to opt out of this.

There is a strong irony with this new ecclesiastical policy considering the history of the Mormon church alone. As Grisham also pointed out, as the followers of Joseph Smith were being chased out of New York state, armed adherents kept the sect from literally dying. The settlement in Nauvoo, Mo., was also subject to extermination — this time at the hands of a Mexican-American War battalion. And there was, regrettably, the 1857 Mountain Meadows Massacre in Utah against a group of migrants through the territory, though details on who ordered the armed attack are unclear. Guns obviously both took and defended lives in both attacks. Guns are a part of this distinctively American religious movement. To ban them outright seems stranger than even some of their doctrines.