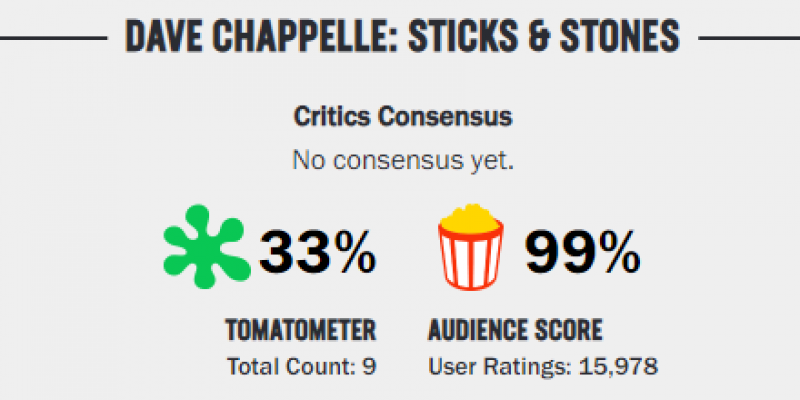 Or, as Chappelle dubs him, “Juicy Smulliet, the famous French actor.”

We’re going to do some commentary on this after the video, because Chappelle’s one-hour stand-up show Sticks And Stones, which is one of the hotter properties on Netflix at present, has generated a reaction that can best be described as societally relevant – especially as a representation of where we are with free speech in our culture right now.

But first, here’s what might be the funniest segment of Chappelle’s show – with a warning, because the language herein is more than a little salty. He lets loose with some F-bombs, N-bombs, S-bombs – it’s almost as bad as a Beto O’Rourke appearance on CNN.

Chappelle’s show has generated more controversy than we’ve seen in years, even though the whole idea of a stand-up comic being “controversial” seems painfully stupid to us.

They’re jokes, after all. How can anyone survive taking themselves and the world around them so seriously that they can’t handle a joke?

There was a dust-up over the Rotten Tomatoes reviews of the show. At present, the audience score for Sticks and Stones significantly outpaces to reviewers’ score…

The first five reviews for Sticks and Stones were all negative, and they’re precisely what you might expect. A taste…

Chappelle spends almost the entire hour arguing that rich and famous people shouldn’t have to face consequences for the f**ked-up things they do. He dismisses and mocks Michael Jackson’s accusers, defends C.K., and even jokes that trans people need to take responsibility for Chappelle’s own transphobic jokes. An extended bit about who he calls “the alphabet people”—the LGBTQ community—packs in as many queer stereotypes as Chappelle can fit, while reserving special scorn and derision for trans people. It’s hard to see how any of this is even meant to be funny, and watching it feels like overhearing retirees and Fox News watchers complain about a world that has thoroughly passed them by.

Chappelle’s not the only major comedian who acts like comedy itself is somehow imperiled by today’s audiences. These complaints come during a time when comedy is flourishing like never before. Comics with actual bravery have redefined what can be considered stand-up, while the internet has let exciting and hilarious new comedians establish themselves through podcasts, social media, and video sites like YouTube. Comedy’s so big right now that superstars like Chappelle and Jerry Seinfeld are being paid more for stand-up specials than anybody ever could’ve imagined. And yet it’s those same comics profiting the most off the current comedy boom who hypocritically act like comedy is dying because not everybody likes their outdated material. Chappelle’s special is terrible not because audiences have changed, but because Chappelle himself is so thoroughly out of touch with today. Maybe all that money has something to do with it?

That’s from a snowflake named Garrett Martin, who is a “senior editor” at Paste Magazine.

First of all, comedy is not flourishing. It’s dying. Quickly. What Martin thinks is “actual bravery” is pure political activism aimed at getting applause from audiences, not laughter. And the “alphabet people” bit, which Netflix didn’t clip and put on YouTube – which is a shame, because it’s an even better segment than the Jussie Smollett piece – isn’t “transphobic.” Frankly, anybody who uses that word is unqualified to judge humor – you’re the very definition of the cancel-culture crowd Chappelle so expertly called out and triggered in Sticks and Stones.

But do you note that Martin’s real criticism of Chappelle is that he’s “out of touch with today?”

Talk about out of touch – that’s the entire reason for the discussion. Today sucks. Today it isn’t possible to tell jokes about men in dresses, which throughout the history of comedy was quite possibly the richest material in existence for comedians (ask the members of Monty Python’s Flying Circus, for example). And by the way, Martin is howling about Chappelle being “out of touch” while the YouTube clip of his Jussie Smollet routine has over SIX MILLION VIEWS in less than a week, while at the same time blaming “all that money” for Chappelle’s disconnect with the times.

Somebody is paying Dave Chappelle seven figures or more to do an “out of touch” stand-up act. Who do you think has a better argument?

Not everything Dave Chappelle says is on the mark. He’s a stand-up comedian – nobody bats 1.000 in that business, and nobody is expected to. The problem comes when turds like Garrett Martin get in the way of talented comics like Chappelle coming to the plate at all.

Here’s hoping Sticks and Stones, and Equanimity, Chappelle’s other stand-up special Netflix released, break all-time records for viewership and smash the new politically-correct cancel culture into little pieces. We’d all be better off if comedy wins the social justice war.