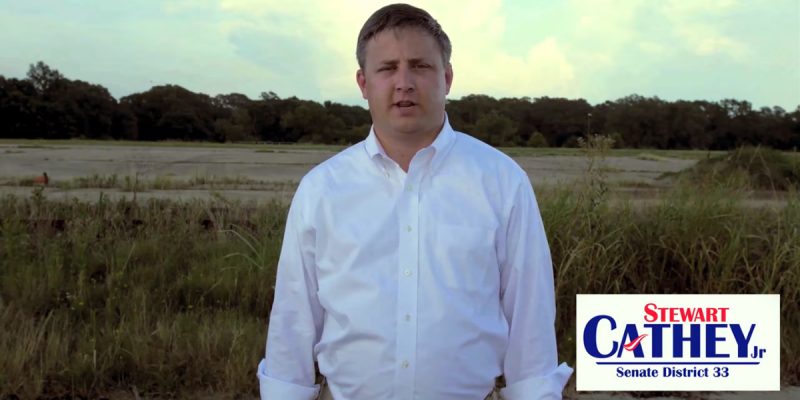 A couple of weeks ago, we showed you a TV spot by Stewart Cathey, who is running for the Louisiana Senate in District 35 – the seat being vacated by Mike Walsworth due to term limits. Cathey went through the numbers telling the story of how Louisiana, and particularly the Monroe area in which that Senate seat is based, is losing its future by failing to graduate its kids from institutions of higher education or, when it does, to keep them from departing for better opportunities elsewhere.

It was a terrific message and a spot-on statement about what the state faces – and what the large crop of new legislators to be sworn in next year will have to find solutions to. When we posted the video of that ad to the site, we got hit with several messages by readers asking why they weren’t seeing that kind of messaging in the governor’s race.

Shortly thereafter, Ralph Abraham did pop out an ad talking about the oil and gas industry and how he aimed to bring it back to life by eliminating the tax, regulatory and legal abuses of John Bel Edwards’ administration – which somewhat spoke to arresting the decline Cathey’s ad brought attention to. Eddie Rispone had a couple of TV spots touching on a similar message, most notably the one where he professes the need to make Louisiana first in jobs as well as football.

Well, Cathey is back with another ad, and this one drives home perhaps even more forcefully the need to arrest Louisiana’s economic decline, and this time he’s got an even better bit of CGI than the first ad did. Needless to say we love this ad, and we want Cathey in the legislature in the worst way – he unquestionably understands the need for pro-growth policies and the Louisiana Senate has been anything but a haven for that kind of policymaking.