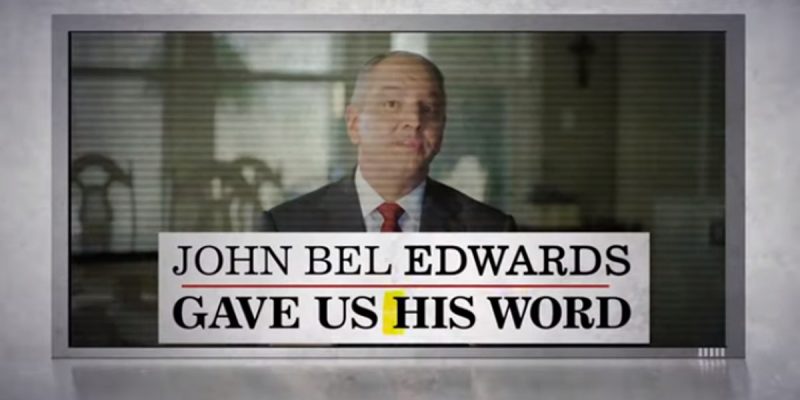 We’re still quite early in the 2019 Louisiana statewide election cycle, but the gubernatorial, judicial, legislative and local races are nevertheless shaping up and the ads are starting to hit the airwaves.

So far, two of them have stood out to us. One is a third-party spot the Republican Governor’s Association is running, and the other is a terrific ad by a candidate for the state senate up in Monroe.

We’ll start with the RGA ad, which is just a devastating indictment of John Bel Edwards’ character and record as governor.

Why do we love this ad? Because it moves fast, it’s simple and it hits two major things which should peel independent and Republican voters off Edwards. First, he’s a liar who shamelessly went around the state claiming he didn’t need to raise taxes to balance the state’s budget, and as soon as he got elected he pretended that he inherited some fiscal crisis requiring $2 billion in tax increases or else he’d have to close down LSU football. This despite the fact he was in the House of Representatives for eight years prior to being elected governor and voted for six or seven of Bobby Jindal’s budgets – the idea that he was surprised by the depths of the state’s fiscal problems isn’t even a convincing lie, and the voters know it (they just need to be woken up about it).

The other thing we like is that the RGA is hammering home how terrible Louisiana’s economy is compared to our neighbors, and connecting that to Edwards’ bait-and-switch tax increases.

We’d love it if somebody came out with an ad hitting Edwards on the bait-and-switch meme. Consultants, feel free to use that one at no charge.

Here’s Cathey’s ad, which is also an indictment of Edwards but not necessarily in name. It’s a warning that Louisiana is losing its future due to bad leadership at the Capitol…

Cathey is running for the Monroe-area Senate seat being vacated by the term-limited Mike Walsworth, and he’s a decent bet to win. That ad is an excellent sales pitch for just that possibility. Cathey also passed along a pretty interesting story from the production of the spot…

During the production of the commercial, the group of children who disappeared representing the 1/5th that will not graduate high school were discussing with their parents about what they were doing. When one of them started joking about not graduating, another one said, “Don’t you get it, we have to graduate, go to college, and get jobs. That’s so really important.”

As I watched their discussion, I was reassured that my desire to serve the people of Senate District 33 was the right now because our children deserve a better future than the one they are facing in Louisiana. These statistics are very real in Louisiana right now, but they don’t have to be, which is why I’m running.

We’ll give an honorable mention for a radio spot that Ralph Abraham is running on talk radio around the state which should be fairly effective. You could argue it’s somewhat similar to the TV ads Eddie Rispone is running which tie him to President Trump, but Abraham’s spot is a little more general in its qualifying him as a conservative to voters on the Right…

We wonder whether calling it the New Green Deal rather than the Green New Deal was something they did on purpose, as if to say “whatever the hell that stupid thing is, it’s terrible.” It gives the ad a little flavor, though some people might find it a bit imprecise.

We like that Abraham is mixing in some state issues, like the trial lawyer/oil and gas piece, with the usual God, guns and abortion fare you’ve got to sell the voters on before they’ll agree you’re a conservative.

Which brings us to the spot we really don’t have any use for. That’s the John Bel Edwards “family tradition” ad he’s splashing all over the tube at present.

First of all, though the less-sophisticated voters might not see it, what John Bel Edwards just told you in that spot is he is the very personification of old-school, backwards, dumbass Louisiana politics. He is bragging on the fact that he comes from a political dynasty in a low-performing parish – Tangipahoa – which has lagged far behind its neighbors to the east (St. Tammany) and the west (Livingston) despite having a better resource base than either one. Wasn’t Tangipahoa the proposed site of Disney World before the local pols screwed up the deal? At least that was the rumor we always heard.

Edwards just told you he’s all about keeping Louisiana exactly where it’s always been, just like his daddy and his brother back in Tangipahoa.

His brother Daniel, after all, only had his laptop computer taken away in an evidence bag when the feds raided his office not all that long ago, in a case which is very much still alive. Over and over again there are suspicious deaths in the Tangipahoa Parish jail, including one of recent vintage which looked an awful lot like a prisoner had been beaten to death. And Edwards’ father, who he shows you in a black and white photo in the spot, had a fun history of dealing with federal investigators as well.

Here’s a fun link for you. It’s a court case in which Frank Edwards, Jr., who was the sheriff in Tangipahoa at the time, sued an ATF agent for conducting an investigation into things like bootlegging, illegal gambling and corruption by public officials in that parish. Edwards claimed the ATF agent had defamed him. The court dismissed the suit.

The undisputed facts concerning defendant Reynaud’s actions are these: From March, 1975, through November, 1975, Agent Reynaud was assigned to an investigation of alleged violations of a combination of federal gun, liquor and gambling laws in Tangipahoa Parish. Included in this investigation was the inquiry into allegations of the unlawful interstate transportation of a sawed-off shotgun, the production of illicit whiskey, and illegal gambling. In addition, Agent Reynaud participated in the investigation of alleged federal offenses involving various public officials in Tangipahoa Parish, including the plaintiff herein. While conducting these investigations, defendant Reynaud provided information regarding various state and federal offenses to the Attorney General’s Office of the State of Louisiana, and its Strike Force, the F.B.I., and the I.R.S., the United States Attorney for the Eastern District of Louisiana, and the United States Department of Justice Organized Crime Strike Force in New Orleans, Louisiana.

That’s your family tradition. But there is much, much, MUCH more to it. We’ll have an opportunity to talk about that at a later time, and when we do Edwards will have regretted ever opening this door.