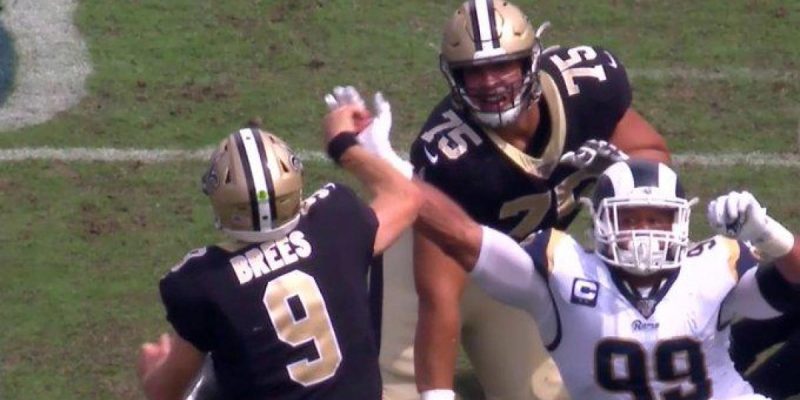 …and it isn’t pretty. With Brees suffering some sort of injury to his thumb after banging it against the Rams’ Aaron Donald, a competitive game slowly turned into a 27-9 disaster. It was only the third time in head coach Sean Payton’s time in New Orleans that his offense couldn’t score a touchdown.

Saints fans watching the game are probably most incensed about the ridiculously poor officiating in the game, which included but wasn’t limited to a game-changing play in which Rams QB Jared Goff had the ball knocked out of his hand before he began his throwing motion, and Saints defensive end Cameron Jordan picked it up and ran it back 87 yards for a touchdown that would have given New Orleans a 10-3 lead. The officials ruled the pass incomplete and blew the whistle, and even though the blown call was partially remedied by an instant-replay review Jordan’s touchdown was negated. The Saints never recovered.

Most of that problem came because something that was very evident in the preseason was confirmed in the game – namely that Teddy Bridgewater, the Saints’ backup quarterback who took to the field after Brees’ injury, can’t do what Brees can. Bridgewater is badly deficient in going through progressions and he’s fatally indecisive in the pocket, which compounds the fact he’s not accurate on throws down the field. What results from those problems is an offense incapable of big plays even with some skill players adept at making them, and an inability to score.

And this team isn’t built to survive an offense which can’t put the ball in the end zone.

In the preseason it was clear Taysom Hill is a better quarterback than Bridgewater. Hill can beat a defense with his legs; he’s the fastest quarterback in the NFL, or awfully close to it. He also demonstrated an improving accuracy in the pocket in the preseason, and Hill also is decisive back there. He’ll take a risk to make a big play, which Bridgewater almost pathologically refuses to. Whether Hill is the answer to Brees’ prolonged unavailability is unknown, but he probably gives Payton more of a fighting chance to keep the Saints competitive than Bridgewater does.

Ian Rapoport reported on Monday morning that Brees went to see a hand specialist in Los Angeles to try to figure out the full extent of his injury. The Saints quarterback is reportedly dealing with a ligament injury to his throwing thumb. Surgery remains a possibility, but we should know the full extent of the injury in the near future.

However it might be a bigger concern for the longer term. Brees was spotted on the sideline with a baseball cap on his head and his thumb/hand wrapped up. He did not look enthused about the situation, understandably. Brees was also not holding or gripping a football or throwing to warm up.

You could see that trainers were working on the area between Brees’ thumb and index finger. That could be a test to see if there was a tear of the UCL of the thumb. If Brees tore his, it would be a major problem for the long haul.

If it’s a UCL, that’s a surgery and a six-to-eight month recovery. He’s out for the year at that point. And at Brees’ age it becomes highly questionable whether he could even make it back on the field. This was always going to be the last or second-to-last year for him, and if this year is shot the Saints are going to need to start the transition to whomever they’re going to replace him with.

This might well become a season in which the Saints’ best interests lie in completely tanking in order to get as high a first round pick as possible. Two of the top six or seven picks in the current round of NFL mock drafts appear to be Alabama’s Tua Tagovailoa and Oregon’s Justin Herbert, who are both quarterbacks. After them, there are another tier of potential first-rounders in Texas’ Sam Ehlinger, Georgia’s Jake Fromm, Colorado’s Steven Montez, Stanford’s K.J. Costello, Washington’s Jacob Eason, Oklahoma’s Jalen Hurts or even LSU’s Joe Burrow, all of whom show up in or near the first round in one of the recent mock drafts. It’s not a bad draft for quarterbacks, which is a potential silver lining.

Of course, this offense requires an elite quarterback. The Saints had one until the first quarter yesterday. Now it appears they won’t for a long while, which makes this season a bitter disappointment two games in.

UPDATE: Reports this morning have it that Brees has a torn UCL in his throwing hand, needs surgery and will be out six weeks. We would regard that as outstanding news, though perhaps highly optimistic. If he’s back in six weeks it’s still possible for the team to make the playoffs this year (though that’s going to require Hill taking over at quarterback soon in order to at least keep the team at .500 by Brees’ return).

Interested in more news from Louisiana? We've got you covered! See More Louisiana News
Previous Article APPEL: Is Anybody Else Bitter About Being Left Out Of The Trump Economic Boom?
Next Article BATISTE: Charlottesville Ruling Proves Louisiana Needs Preservation Laws