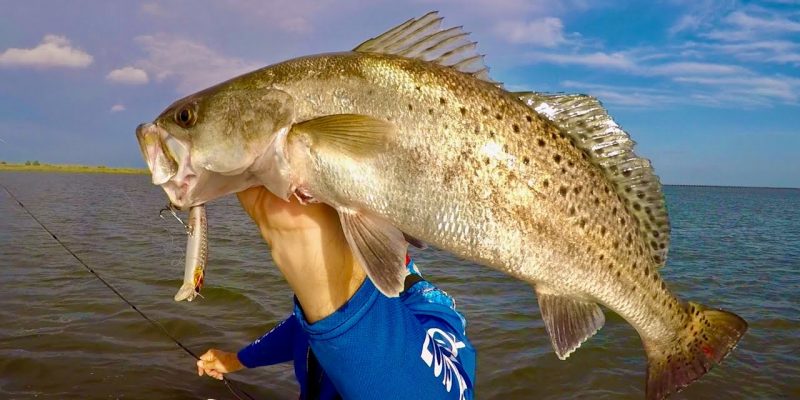 They say only two things in life are certain: death and taxes. One day, the grim reaper will sneak up and tap you on the shoulder, and it will be your turn. Death is certainly never welcome, but at least it relieves you from the other axiomatic certainty — at least for now. That could always change with the next election.

Anglers, however, might want to add another inevitability to the list: speckled trout that get on grass beds and attack jerkbaits in the early fall. Normally, the run kicks off the season in September, but this year, the ninth month of the year was hotter than the sixth, seventh or eighth, so speckled trout were nowhere to be found during the first official month of fall.

But photoperiod has declined and temperatures have cooled a bit over the last two weeks, and that’s shoved the fish onto the submerged grass beds, where they seek to devour vegetation-loving shrimp.

There are a number of techniques that are effective for catching them, but few are as fun or as productive as twitching jerkbaits and feeling fish hit like Demario Davis.

On a whim, I went out in brutal conditions Friday to see if the specks had yet moved to the grass beds, and was delighted to discover they had. With a few exceptions, the fish I caught tended to the small side, but bigger ones are moving in every day to join their younger brethren.

Like the video? Please give it a thumbs-up, and subscribe to the Marsh Man Masson channel on YouTube. Also, leave a comment below or on the YouTube page. Do you throw jerkbaits this time of year? If not, what are some of your favorite fall patterns?

Interested in more news from Louisiana? We've got you covered! See More Louisiana News
Previous Article Reports: Fastest growing cities are in Florida, Texas and Western states
Next Article APPEL: A Pair Of Louisiana Items To Chew On…