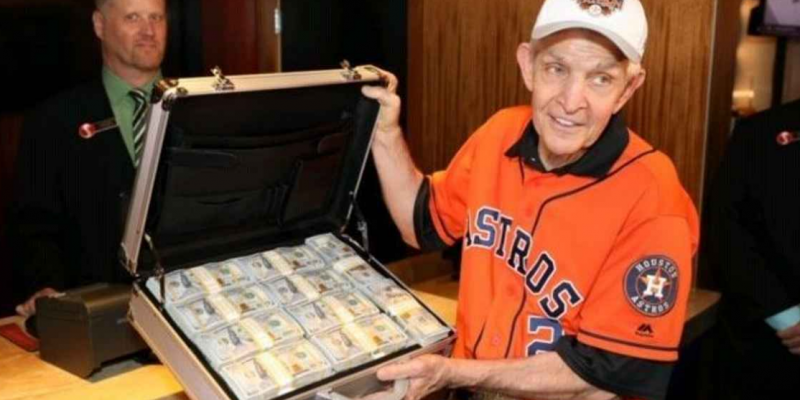 If you drive around Houston you’ll see billboards offering to refund mattresses of $3,000 or more if the Astros win the World Series. Businesses throughout the city have “Go Astros” signs posted outside.

That’s because the Astros are breaking MLB records and could make it to the World Series two years after their first franchise win.

In 2017 Jim “Mattress Mack” McIngvale, owner of Gallery Furniture in Houston, refunded more than $10 million in purchases from his store after the Astros beat the Los Angeles Dodgers to win the World Series.

He placed a bet to offset the cost, as most businesses can’t afford to give away $10 million.

This year, McIngvale, also made history by placing one of the largest single bets at the DraftKings sportsbook at Scarlet Pearl casino in Biloxi, Mississippi– again betting on the Astros to win the World Series.

McIngvale wired $3.5 million on Monday and flew from Houston to Biloxi on Tuesday with the betting slip in his pocket.

McIngvale also recently placed a $200,000 World Series bet on the Astros +250 at the South Point in Las Vegas and has additional wagers for undisclosed amounts with Nevada bookmakers Caesars, MGM, Treasure Island and Circa Sports, according to ESPN.

“I’m just amazed how much DraftKings and Scarlet Pearl took, and they didn’t blink an eye,” McIngvale said. “That’s pretty rare in the sports betting business in the United States for someone to take three and [a] half million dollars.”

McIngvale, 68, became more widely known after he opened his store to help anyone in need during Hurricane Harvey. He also gave away mattresses for free.

When Hurricane Harvey hit, McIngvale waded through nearly 3 feet of floodwater in his own home to head to his Gallery Furniture store on I-45. He got his employees to dispatch delivery trucks to rescue people stranded in high water.

He then went on FaceBook Live to tell people they could find shelter in his store.

He told KPRC Channel 2, “I feel a big responsibility to Houston because Houston’s been so good to us — the McIngvale family and all the Gallery Furniture employees. These customers — they’re my people, so what am I going to do? Let them drown?”

The Thanksgiving after Harvey, he arranged for Metro shuttle buses to bring roughly 10,000 Houstonians to his store parking lot for a traditional Thanksgiving feast serving turkey with all the trimmings.

Then at Christmastime, he marked his 35th annual Christmas Giveaway by surprising 30 local families with a house full of furniture.

Mack said, “What matters is we all have a responsibility for the well-being of the community and we’re just trying to do our part.”

He also started a Rebuild Texas GoFundMe campaign to help displaced families in the aftermath of Harvey.

He doesn’t need to give away mattresses if the Astros win.

What business would do that?

But he’s doing it because he loves Houston and it’s his way of giving back.