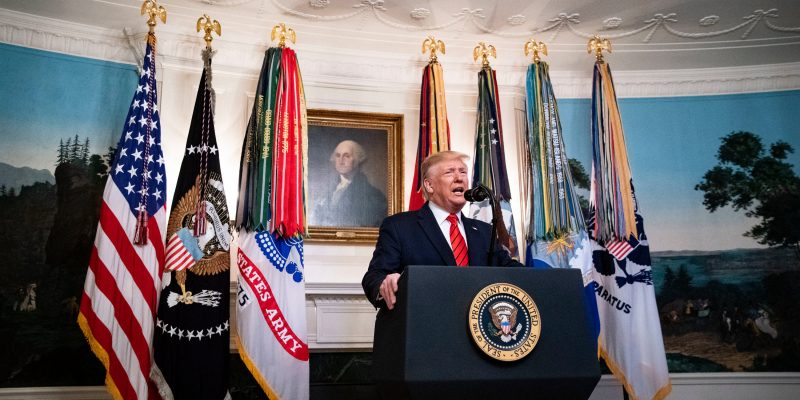 President Trump posted a cryptic tweet Saturday night around the same time that reports began trickling in that an operation targeting ISIS leader Abu Bakr al-Baghdadi had been executed.

“Something very big just happened,” the President tweeted late Saturday night before announcing that he would address the nation at 9 AM on Sunday morning.

After much anticipation and some rumors of the ISIS leader being captured, the President provided clarification. President Trump began his address to the Nation saying,

“Last night the United States brought the world’s #1 terrorist leader to justice. Abu Bakr al-Baghdadi is dead. He was the founder and leader of ISIS, the most ruthless and violent terror organization anywhere in the world.”

“Capturing or killing Baghdadi has been the top national security priority of my administration. US Special Operations forces executed a dangerous and daring night-time raid in Northwestern Syria and accomplished their mission in grand-style.”

The President then walked the Nation through the raid saying,

“No personnel were lost in the operation while a large number of Baghdadi’s fighters and companions were killed with him. He died after running into a dead-end tunnel, whimpering and crying and screaming all the way. The compound had been cleared by this time with people either surrendering or being shot and killed. Eleven young children had been moved out of the house and are uninjured. The only ones remaining were Baghdadi in the tunnel and he had dragged three of his young children with him, they were led to certain death. He reached the end of the tunnel as our dogs chased him down. He ignited his vest, killing himself and the three children. His body was mutilated by the blast, the tunnel had caved in on it in addition. But test results gave certain, immediate, and totally positive identification. It was him, the thug who tried so hard to intimidate others spent his last moments in utter fear, in total panic and dread, terrified of the US Special Forces bearing down on him.”

The Commander-in-Chief thanked the US military,

“I want to thank the soldiers and sailors, airmen and Marines involved in last night’s operation. You are the very best there is anywhere in the world.”

“A brutal killer, one who has caused so much hardship and death has violently been eliminated. He will never again harm another innocent man, woman or child. He died like a dog, he died like a coward. The world is now a much safer place. God bless America.”