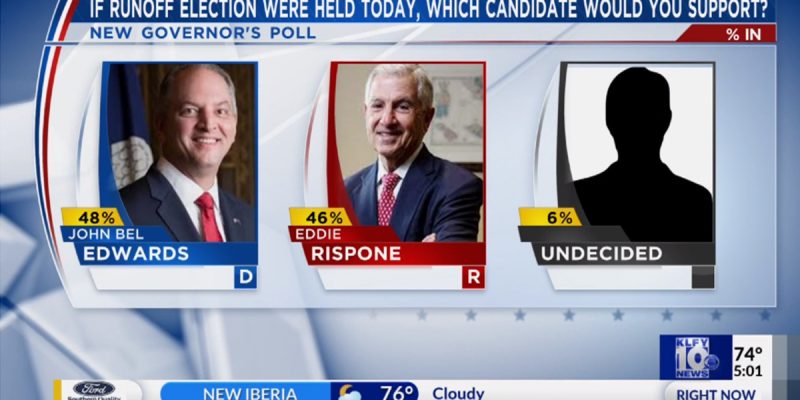 The numbers on this thing are pretty close to those the We Ask America poll of a couple of weeks ago had. That survey had John Bel Edwards and Eddie Rispone tied at 47 apiece, and we found it very interesting that for close to two weeks Edwards’ camp, which had released a poll the day after failing to top 50 percent in the Oct. 12 primary that showed him ahead of Rispone 52-36, had nothing to offer to dispel We Ask America’s numbers.

It’s a reasonable conclusion that now we know why. Specifically, because Edwards’ camp didn’t have any numbers to dispute We Ask America, and they didn’t want the public knowing that their 52-36 poll was a fantasy. So when John Couvillon’s poll for the Nexstar TV stations across the state shows essentially one percentage point differential from We Ask America, we know that this race is essentially tied.

Two weeks into the runoff in the Louisiana governor’s race, incumbent Democrat John Bel Edwards has only a narrow lead over Republican gubernatorial challenger Eddie Rispone – and it will all come down to turnout.

That’s according to an exclusive new Nexstar poll conducted by JMC Analytics and Polling in Baton Rouge, which shows Edwards leading Rispone 48% to 46%.

Edwards won 47% of the vote during the primary election, finishing first, and Rispone, a Baton Rouge businessman, finished second with 27% of the vote.

The new poll, conducted October 24-26, concludes that runoff race will go down to the wire, and the ultimate result is almost entirely dependent on partisan and/or racial turnout both during early voting and on Election Day.

“Given that the undecided percentage is down to 6% (4% if “leaners” are excluded), this is now an election where turnout matters a lot more than persuasion, particularly with early voting less than a week away,” pollster John Couvillon noted in a summary of the poll’s findings.

Couvillon said the race comes down to turnout, plain and simple, because the undecideds at this point are largely nil.

Assuming that turnout by demographic group is identical to what it was in the primary, Rispone needs 87% of the vote that supported one of the “also rans” in the primary. Rispone’s getting 63% of the “also ran” vote thus far is why he’s running behind Governor Edwards. However, a second factor marginally benefits Rispone: black turnout in the primary was somewhat below recent historical norms, while Republicans were more energized. If the poll results were recalculated to mirror the demographic breakdown of the primary electorate (28% black, 37% Republican, 20% white Democrat, and 14% white Independent), the ballot test with “leaners” included would be 49-47% for Edwards instead of 50-47%.

The thing is that in most election cycles, the turnout in the runoff is usually older, whiter and more conservative than the turnout in the primary. This isn’t always true – the exception in Louisiana statewide races was the 2015 runoff that Edwards won over David Vitter when the latter was hemorrhaging and Republican voters knew he was cooked. You don’t get any of those vibes now – especially not after Mike Pence’s trip to Baton Rouge Monday for a fundraiser we’re told brought in close to three quarters of a million dollars, and Rispone is holding the endorsement of his major Republican opponent, which was not the case for Vitter in 2015.

Rispone spent the afternoon with Pence, and skipped a candidate forum put on by the Baton Rouge Press Club which was not televised. That turned out to be a John Bel Edwards love-fest, but even then Edwards had nothing to offer but a series of attacks on Rispone which mirror what his TV ads look like, and also his social media… 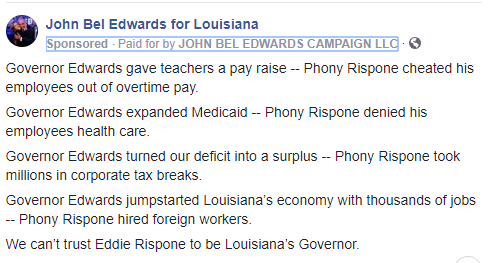 The feel one gets from this is Edwards is beginning to be desperate. He can’t get to 50 as an incumbent against an opponent who has all the money he wants, he’s given up on running on his record and he’s getting nastier and nastier every day.

And meanwhile Rispone is starting to look like he’s enjoying all this after what was mostly a grind through the primary.

How many more polls we’ll see in the next 2 1/2 weeks is a matter for speculation. The basic lesson of Couvillon’s poll from Monday, though, is correct, which is this is all about turnout.

Interested in more national news? We've got you covered! See More National News
Previous Article SADOW: Edwards Is Awfully Ironic In Accusing Rispone Of Lacking Detail
Next Article APPEL: Louisiana Can Choose Its Future On Nov. 16, Or Delay It