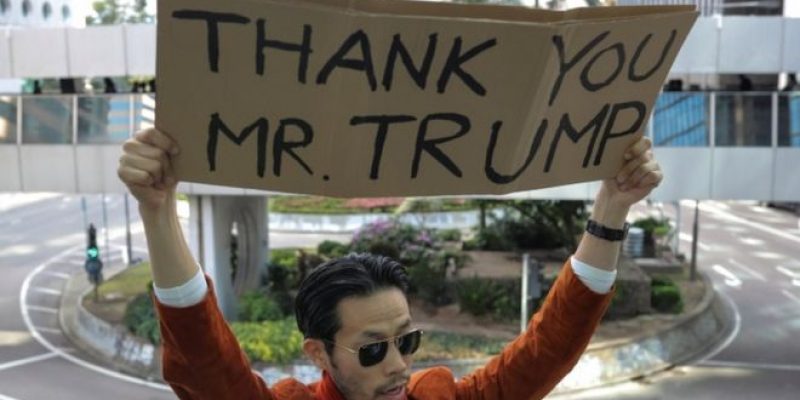 Congress can agree on one thing- Democracy. The often gridlocked legislative branch of Democrats and Republicans came together to pass a bill almost unanimously, codifying the United States’ solidarity with Hong Kong protesters in their recent fallout with Beijing.

As we previously reported, protests began when Hong Kong’s quasi-independence was threatened by a bill that would have normalized the extradition of political dissidents to China. The bill was withdrawn after public outrage erupted, prompting massive protests in the streets.

The Hong Kong Human Rights and Democracy Act of 2019 was passed in the US House of Representatives by an overwhelming vote of 417 to 1. The bill was even more easily passed in the US Senate by a unanimous vote.

The legislation also requires that the State Department verify Hong Kong’s continued defense of human rights and Democracy in order to renew the special, lucrative trade agreement that it enjoys. That agreement includes Hong Kong’s exclusion from tariffs on China.

President Trump signed the bill despite the possible, if not likely, negative impact the move could have on the fragile ongoing trade negotiations between the two superpowers.

The White House released the following statement from the office of the President:

“I signed these bills out of respect for President Xi, China, and the people of Hong Kong. They are being enacted in the hope that Leaders and Representatives of China and Hong Kong will be able to amicably settle their differences leading to long term peace and prosperity for all.”

“This is a severe interference in Hong Kong affairs, which are China’s internal affairs. It is also in serious violation of international law and basic norms governing international relations. This Act will only further expose the malicious and hegemonic nature of US intentions to the Chinese people.”

Making matters worse for China, pro-Beijing candidates were overwhelmingly defeated in Hong Kong’s elections this week with pro-Democracy candidates flipping the balance of power in local government. After a record-setting turnout north of 70%, that balance went from 331-124 Beijing to 388-89 pro-Democracy.

The people of Hong Kong are likely feeling especially grateful this Thanksgiving.