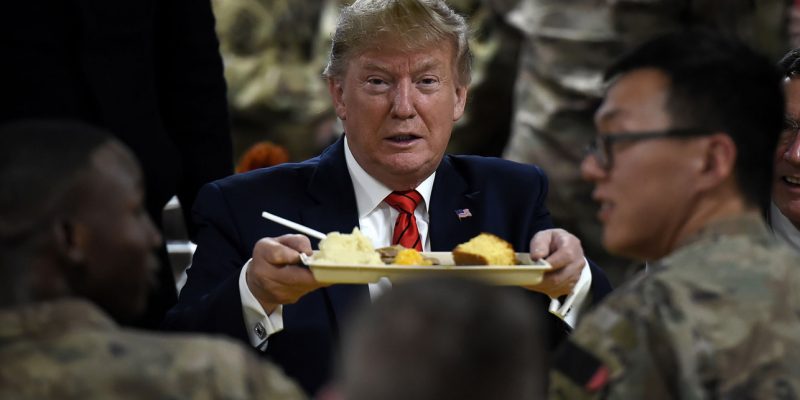 The President served Turkey to hundreds of troops and expressed his gratitude for their service,

“There is nowhere I’d rather spend this Thanksgiving than right here with the toughest, strongest, best & bravest warriors on the face of the Earth.”

President Trump cut peace talks with the Taliban in September after heavy fighting but told the troops peace talks will now resume saying,

“The Taliban wants to make a deal—we’ll see if they make a deal. If they do they do, and if they don’t they don’t. That’s fine… We’re going to stay until such time as we have a deal, or we have total victory, and they want to make a deal very badly.”

“Our message to the bloodthirsty terrorists is clear, you will not escape your wretched fate because the long reach of the really awesome power of the United States military is unstoppable.”

Check out this video clip of the President’s visit to the troops:

More than 2,400 American soldiers have been killed in Afghanistan since 2001 when the United States’ longest lasting war began. Afghan military casualties are north of 60,000 with another 70,000 enemy casualties between al-Qaeda, the Taliban, and ISIS. Sadly, nearly 40,000 civilians have also been killed.

President Trump hopes to wind down US involvement without compromising the stability of Afghanistan, delivering on his campaign promise to stop “endless wars” in the Middle East.

Interested in more national news? We've got you covered! See More National News
Previous Article Thanksgiving: The Antidote To Godless Communism
Next Article IG estimates: Social Security pays billions in benefits to those with no numbers