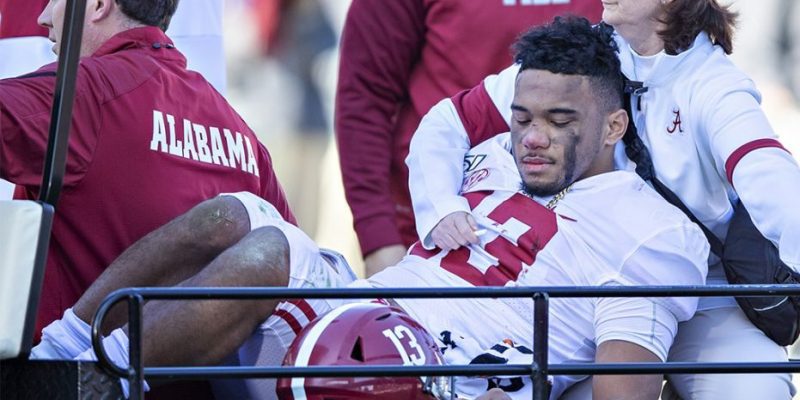 If star quarterback Tua Tagovailoa were an LSU Tiger and had any eligibility left, there is no doubt what number he would be wearing upon his return to the field next year.

That will never happen, of course, but it is the spirit of the No. 18 tradition that reminds us of how college football can provide any athlete with the opportunity to face life-defining hardship head-on.

In hindsight, yes, it looks like a terrible decision for Alabama head coach Nick Saban to still have had his star quarterback in the game with just minutes remaining in the first half and the Tide up 35-7. Rolling to his left on third down, Tagovailoa was smashed to the turf from behind by two defenders after throwing the ball out of bounds.

Perhaps that practice was deemed necessary by Saban because of the interception Tua threw in a similar situation against LSU, an interception that would lead to a Tiger touchdown and 33-13 halftime deficit for the Tide.

The dreadful images of Tua’s injury–the helmet flying off, his writhing in pain, his 100% dependence on two grown men to carry his weight to the medical cart, the face-black crosses smeared with blood on his cheeks–all evoke the terrible knowing that you are watching a fallen warrior leaving the battlefield for the final time in that uniform.

No matter what team you root for, it was a sad and terrible sight to watch.

If the 35-7 lead didn’t bring out the critics against Saban, those images certainly did.

This is a small sampling, and of course there is a sufficient number of commentators out there saying just the opposite, defending Saban. In today’s social media world, everyone has an opinion. Admittedly it is what makes sports and the human-interest stories attached to them so intriguing.

It is, after all, one of the things that got me to thinking. How exactly do I feel about this?

Yes, Tua’s injury will likely cost him millions of dollars, at least in the short-term, and in a world where college student-athletes are not paid a portion of the money they help generate for the university–at least not legally–this turn of events can seem cruel and unfair. And when things are cruel and unfair, some people need a scapegoat.

That scapegoat in this case is the greatest college football coach of all time.

This situation is not without precedent for Saban. Back in 2002, when he was in the third year rebuilding the LSU program, he left raw but improving Matt Mauck in the game in the fourth quarter of a 36-7 demolishing of Florida in Gainesville. On a quarterback draw play, Mauck broke his foot, and after that victory the Tigers were never the same. They’d end up 8-5 with a Cotton Bowl loss to Texas.

But there was a silver lining in that injury into which these unfortunate occurrences usual materialize.

In the spring of 2003, as a result of the foot injury, Mauck had to learn to rely less on his running ability and to develop better pocket awareness and ability. He went from completing only 49% of his passes in 2002 to 64% in 2003, throwing for a then-school record 28 touchdowns.

And of course the end result for LSU was an exhilarating end to the season in which they blew out Georgia for the SEC title and topped mighty Oklahoma for the national championship.

The number tradition even helped Bennie Logan get selected in the third round by the Philadelphia Eagles after the 2011 season, a full eight years after the tradition began.

“We all know he wore the No. 18 at LSU so you know he has character and is a guy that will get a lot of respect in the locker room,” Eagles general manager Howie Roseman said after drafting Logan.

I could go down the rabbit hole all night and give a litany of causes and effects that stemmed from Nick Saban’s decision to keep Matt Mauck in the game that night in Gainesville. The injury wasn’t his fault then, and the Tua injury isn’t his fault now.

It is simply the violent nature of American football. And more importantly, it is simply the nature of life. If you choose to play football as the central part of your life, where else would life’s adversities come from?

Said Saban, who talks to Tua every day, “We’re encouraged by his positive energy. As I’ve said before, I call him to cheer him up and he usually cheers me up. That’s just who he is.”

It is who he is because he is a man of character. Anything you read or hear says as much. If anybody were a betting man, he’d probably put money on Tua making a full recovery from this devastating injury.

So yes, Tua might come back to become everything the draft prognosticators expected him to be before last Saturday. He might be a millionaire and Super Bowl-winning quarterback.

But one thing is for certain. This tragedy will present Tua with opportunities he would have never gotten without the injury, opportunities that have nothing to do with hundred-dollar bills and a luxurious NFL lifestyle. What too many people forget is that with that millionaire lifestyle comes a world-load of temptations and problems that no middle-class man will ever know, that Tua’s family probably didn’t raise him to indulge in. And if to never play football again is Tua’s destiny because he is needed in this world on more important stages than the college football field, then so be it.

The countless people he impacts would instead be thanking Saban on Twitter, and the human interest story would be on the number of souls Tua has touched, not the number of touchdown passes he’s thrown.

This is what sports are all about.