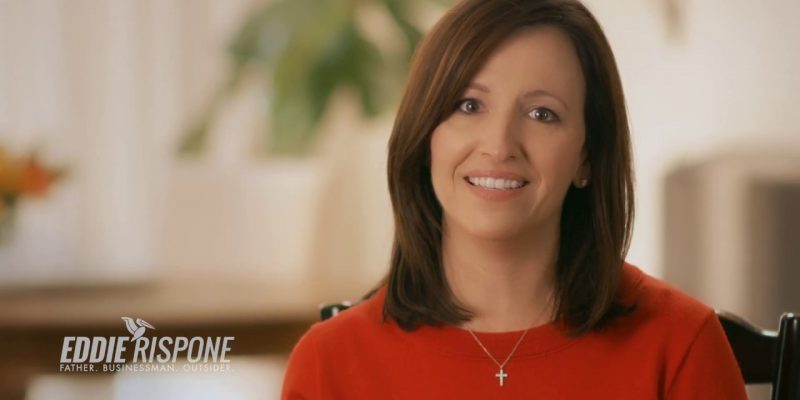 You’ve seen this ad on TV by now if you’re in Louisiana, but everything about it screams “winner.” Particularly given the circumstances in which it comes. More on that below, but in case you might have missed it, here’s the best campaign spot of the cycle so far…

Why is this so good? Obviously, the first reason is it’s just a great ad. Dena comes off as extremely charismatic, she’s well-spoken, she’s attractive but most of all she’s very, very relatable. Everybody knows a Dena who they like having around because she’s just a really sweet person who makes things easier.

Right? And that comes out of this ad in an unmistakable way. So when Dena says Eddie’s a good man and somebody who’ll make you proud as governor, you can’t help but want to believe that’s true.

But the circumstances surrounding the ad make it all the more powerful.

First of all, this is a ridiculously negative, dirty gubernatorial campaign. Sure, that’s true on both sides – there have been bombshell attacks leveled at Edwards again and again by the RGA, by Truth In Politics, by the state GOP and so forth, hammering away at him for his economic record and bashing him for lying about whether he’d raise taxes. We’ve had Johnny Anderson, we’ve had pardons, we’ve had the whole bit.

And while Edwards has done some campaign ads, particularly in the primary, touting his record and rehashing his messaging about West Point and his family’s law enforcement background, his side has been intensely negative as well. He started off trashing Ralph Abraham for not giving enough money to chairty and missing votes in Congress. He beat Abraham up as a pill-pusher hooking people on opioids, he’s attacked Rispone for hiring “foreign workers” – which essentially means three ISC employees hired who were LSU grads originally from other countries – he’s accused Rispone of “benefiting” from tax breaks, and on and on.

And lately, Edwards is spreading rumors about all the devastating, horrible things Rispone wants to do as governor, like ending supplemental pay for first responders, doing away with the TOPS program, canceling school lunches and even ending Medicare. It’s risen to a level of absurdity so pathetic that Edwards’ camp is even equating Rispone with David Duke, something which looks to have backfired pretty badly; Edwards said he called New Orleans city councilman Jay Banks, who heads that city’s BOLD political organization and was in charge of the David Duke messaging in a radio spot (it also appeared on door-hangers in Shreveport without a paid-for line, which is illegal), and told him to take that radio ad down. Of course, since the radio ad is an independent expenditure it can’t legally be coordinated with the Edwards campaign, so one wonders whether Edwards’ phone call didn’t break election laws – not to mention that if Edwards coordinated with BOLD to take the radio ad down he might well have coordinated with them to put it up, before realizing it pissed off more voters than it attracted once the word got out about it.

Given all of that, there has got to be more than a little voter fatigue with all the brutal attack ads, and if you can’t shut it off altogether you’re probably at least hoping for a little bit of sweetness and light.

And here comes Dena, riding to the rescue.

Rispone’s campaign is still going to take criticism for pinning everything on Trump rather than presenting a clear agenda for voters to evaluate. As we noted yesterday, there’s a very good reason why they aren’t doing that – when you’re up against somebody like John Bel Edwards, who’s willing to so shamelessly lie about his opponent’s policies, you’re marching yourself into a jackpot presenting any specifics at all, and every reform item you present is going to break the rice bowl of some special interest probably already aligned with Edwards, which means they’ll turn loose a chunk of change to attack you for it. So you don’t do that. What you do to promote yourself is to talk about how you’re simply a better man than the other guy.

Which Dena does with style.

Rispone’s camp has another ad along the same lines, this one starring his wife Linda…

This is also a good ad, though it might not have quite the impact as the one with Dena. The reason? Pollsters and consultants we’ve talked to say the real swing voters in this race, which is mostly about turnout among voters committed one way or the other, are independent, affluent women in places like Jefferson, St. Tammany, Ascension, Lafayette and East Baton Rouge Parishes. They’re usually Republican voters in Louisiana, but Trump doesn’t really float their boat and Rispone hasn’t nailed them down by aligning himself with the president. It takes a softer touch to attract them. Most of them are under 50; the 50-and-older crowd are usually more conservative and thus already in Eddie’s camp.

We think this is a home run of an ad and Rispone could do a lot worse than just hammering away with it until Election Day – unless they want to put Dena back up on TV with another ad, which would be just fine.