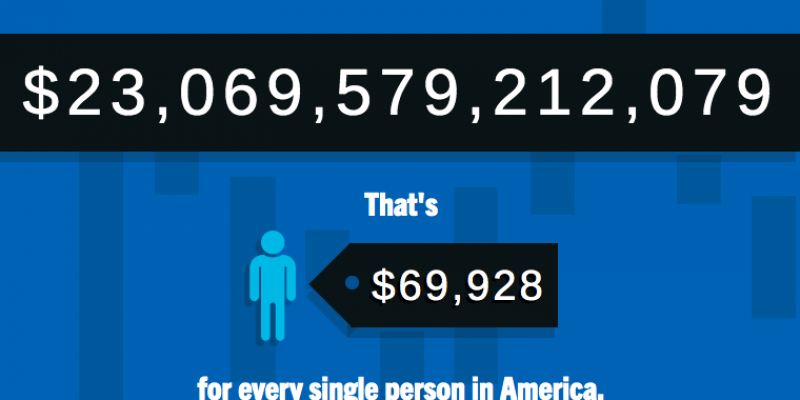 The national debt in 2019 reached its highest level relative to the size of the economy since 1948, the Peter G. Peterson Foundation (PGPF) said in its end-of-year review of the national debt.

The national debt “went from bad to worse” in 12 months, the foundation notes. “If lawmakers make no changes to current law, debt held by the public is projected to climb to 144 percent of gross domestic product (GDP) by 2049,” the report warns.

“However, under an alternative fiscal scenario, the outlook could be even worse,” the foundation adds. “If lawmakers choose to continue certain policies – for example, extending the tax cuts enacted in December 2017 – the debt would swell to over twice the size of the economy by 2049.”

The report highlights 11 worrying factors, including the amount of debt held by the public as a percentage of GDP, decreased revenue compared to increased spending, and the amount of interest being paid on the debt.

What is unusual about the growing debt and deficit, the foundation notes, is that federal deficits are growing in a period of low unemployment and economic growth, which does not normally happen.

The growth of real (inflation-adjusted) GDP in 2019 is on track to be lower than it was in 2018, according to the report. Economic growth is generally determined by changes to productivity and in the size of the labor force. Recent fiscal policies have boosted GDP, the report says, but economic growth is projected to slow as the effects of federal stimulus policies wane and “the U.S. population undergoes an unprecedented demographic shift.”

Despite rapid economic growth, it is not enough to keep up with increased spending in the area of healthcare, prescription drugs, and paying interest on the debt, which the foundation identifies as key increased and dedicated spending areas.

Two key spending areas include overall healthcare spending, which is projected to grow faster than the economy and reach nearly 20 percent of GDP within 10 years, and an increase in prescription drug costs. According to the Centers for Medicare and Medicaid Services, spending on prescription drugs will continue to climb to $1,635 per capita by 2027, representing an increase of 60 percent from 2017.

Worse still is the amount of interest the government pays on debt, the report notes.

“Interest is the fastest growing ‘program’ in the federal budget,” the foundation says. Net interest payments totaled $376 billion in 2019, growing by 16 percent in 2019.

By 2029, interest payments alone are projected to be more than twice the size of what they were in 2018, according to the report.