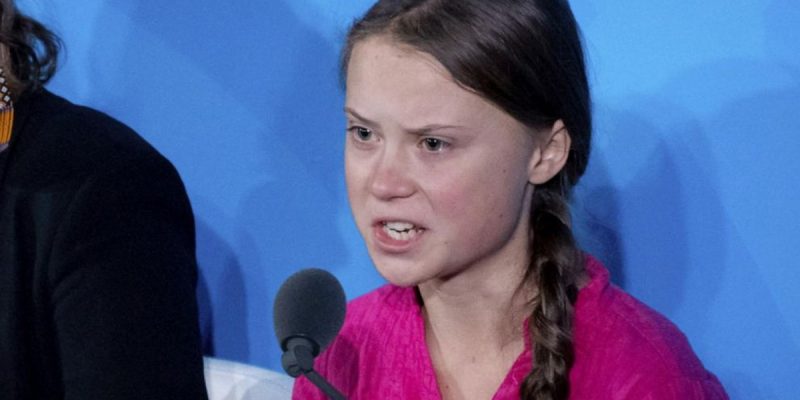 Greta Thunberg, the Swedish Wednesday Addams lookalike child abuse victim who spent most of the year being trafficked across the globe to spout inanities and dystopian fantasies about the end of the world, is TIME Magazine’s Person of the Year.

Not anyone from the Hong Kong protests. Not Adam Schiff, who’s managed to capture headlines for four months as his clownish impeachment proceedings have all but shut down the nation’s capital. Not Simone Biles, who has become arguably the greatest female athlete the world has ever seen. And certainly not Donald Trump, who has defied political and economic gravity and is remaking the post-Cold War world despite internal political resistance that would have paralyzed every U.S. president since Ronald Reagan.

The TIME article canonizing Thunberg has to be one of the most delusional and idiotic screeds ever written. Here’s just a taste…

Thunberg is 16 but looks 12. She usually wears her light brown hair pulled into two braids, parted in the middle. She has Asperger’s syndrome, which means she doesn’t operate on the same emotional register as many of the people she meets. She dislikes crowds; ignores small talk; and speaks in direct, uncomplicated sentences. She cannot be flattered or distracted. She is not impressed by other people’s celebrity, nor does she seem to have interest in her own growing fame. But these very qualities have helped make her a global sensation. Where others smile to cut the tension, Thunberg is withering. Where others speak the language of hope, Thunberg repeats the unassailable science: Oceans will rise. Cities will flood. Millions of people will suffer.

“I want you to panic,” she told the annual convention of CEOs and world leaders at the World Economic Forum in Davos, Switzerland, in January. “I want you to feel the fear I feel every day. And then I want you to act.”

Thunberg is not a leader of any political party or advocacy group. She is neither the first to sound the alarm about the climate crisis nor the most qualified to fix it. She is not a scientist or a politician. She has no access to traditional levers of influence: she’s not a billionaire or a princess, a pop star or even an adult. She is an ordinary teenage girl who, in summoning the courage to speak truth to power, became the icon of a generation. By clarifying an abstract danger with piercing outrage, Thunberg became the most compelling voice on the most important issue facing the planet.

What Greta Thunberg really is is none of that. She’s a deeply disturbed child being used by a deceitful and sinister elite to push a false narrative aimed at convincing people to surrender their freedom and prosperity to government control. From an American Spectator column of a few weeks ago…

The 16-year-old, whose name is Greta Thunberg, suffers from Asperger Syndrome, a condition on the autism spectrum. One wouldn’t normally expect someone with Asperger’s to be chosen as the spokesperson for a global movement, given that sufferers from that condition are characteristically lacking in nonverbal communication, struggle with empathy, are typically very uncomfortable around large crowds, obsess pathologically about subjects not under their control, and often engage in long rants without consideration for how they will be received. Thunberg appears to be a more serious case, suffering from depression so severe she once went two months without eating and had to be pulled out of school.

And yet that’s precisely what the global warming cultists did, plucking this highly susceptible child, juicing her up with all of the bleak Malthusian auguries of an apocalypse less than two decades in the offing, and then featuring her at protest events across Europe before taking the Angry Cassandra Revue transatlantic. Congress was subjected to Thunberg’s scowling, then she addressed the idiotic Climate Strike demonstration late last week before Monday’s tour de gripe.

That this was a thorough and complete put-up job, the precise opposite of an organic grass-roots movement, can’t be emphasized enough. As the Washington Examiner’s Tiana Lowe recognized, Thunberg “has stage-parents, literally. Her mother sang opera internationally until the teenager convinced her to quit due to greenhouse gas emissions from flying, and her father and grandfather both gained fame through acting and directing.”

Question: were Daddy or Grampy part of the crew of Tommy? Just thought I’d ask, seeing as though it feels like I’ve seen this movie before — but the music was a lot better the first time.

If you believe mère Thunberg gave up an operatic career because of global warming concerns rather than recognizing she was washed up and there was a better gig waiting in the propping up of that otherwise-problematic kid as the High Priestess of the Global Warming Cult, you are not paying attention. In fact, as the Daily Beast recounts, the genesis of Monday’s spectacle came when Greta stopped having nightmares about other topics and instead started having them, obsessively, about the coming climate change apocalypse, and wouldn’t be dissuaded. It’s pretty clear that the parents decided to go with the flow and found a way to monetize the crazy. Hooking up with the well-funded and not overly scrupled environmentalist Left, which is more than happy to prostitute other people’s children for their cause, was just a spark of opportunistic genius one can’t find on an opera stage or a Swedish movie set.

So the rest of us will just have to pick up the pieces from The Traveling Thunberg Show. And that won’t be easy. Exactly how are you going to have a reasoned discussion with someone who believes that cow farts and Ford Explorers are going to kill the planet in 15 years?

Everything about Greta Thunberg is a fraud, except for the embarrassing and ill-mannered presentation she assails her captive audiences with.

Let’s just review her most famous moment to date, shall we? Then let’s decide if this is the most consequential person on Planet Earth this year.

That, TIME wants you to believe, is what moves people.

Whatever. No wonder TIME is just about out of business. That would be a mass extinction we could get behind.