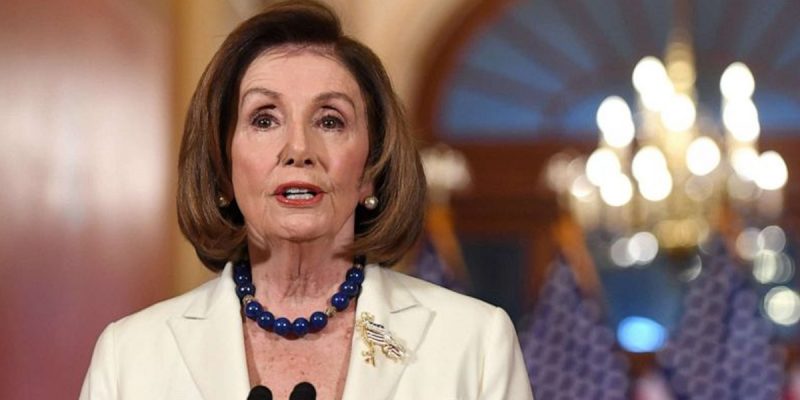 …instead of Pandora’s Box, owing to the political horrors for the Democrat Party that are likely to flow from Pelosi’s decision to move forward with an evidence-free impeachment of a duly-elected president.

Pelosi took to a microphone this morning and delivered that decision in a shaky voice suggestive of too much wine the previous evening, invoking the Declaration of Independence and proclaiming House Democrats are compelled by the Constitution to impeach President Trump.

BREAKING: House Speaker Nancy Pelosi: "Today, I am asking our chairman to proceed with articles of impeachment." https://t.co/yMg0trFZ0O pic.twitter.com/038nBeYEdv

This came after a day in which the Democrats on the House Judiciary Committee called three law professors as “witnesses” to discuss impeachment – one of them, a Stanford law professor named Pamela Karlan who it was later revealed to be an Elizabeth Warren donor and an Eric Holder fangirl, delivered such a snarling, offensive performance that later in the day she was forced to apologize for having made wisecracks about the president’s 13-year-old son.

Meanwhile, Georgetown law professor Jonathan Turley, who is himself a liberal Democrat, scolded the House Democrats for bringing impeachment proceedings and called them an abuse of power.

And this morning, polls show the public is not with the Democrats on impeachment, and the further this goes the worse it gets.

President Trump’s job approval rating has barely budged since House Democrats announced in September that they were formalizing their impeachment inquiry, according to polling released Thursday that also showed Mr. Trump’s numbers holding steady in some key 2020 battleground states.

Among the more than 165,000 registered voters nationwide surveyed in November, 43% said they approve of the job Mr. Trump is doing compared to 54% who said they disapprove, according to the Morning Consult polling.

That’s slightly better than the 42%-54% approve-disapprove split from polling before the start of the formal impeachment probe at the end of September.

There’s also been no statistical change in Mr. Trump’s net approval rating since then in 37 states, including key battlegrounds like Florida, Pennsylvania, Ohio, North Carolina, and Arizona, the polling found.

Still, among 14 states that will be closely watched in next year’s election, Mr. Trump’s net approval rating – the share of registered voters who approve of his job performance minus those who disapprove – is positive only in Texas, where he had a 49%-46% approve-disapprove split.

At this point public support for impeachment should be at its zenith, and instead the numbers aren’t moving at all. Democrats and those who disapprove of the president are supportive of the process to various degrees, while Republicans are almost unanimously furious about it. There should have been a breakthrough into a bipartisan consensus that the president must go by now, and there is not.

This isn’t a new problem. When Congress broke for Thanksgiving, it was clear that impeachment was a political dog with fleas. Pelosi’s correct course was to put it to sleep and come up with something else to placate the insane leftists who make up the majority of her caucus, but what appears clear is she doesn’t have a strong enough position in that caucus to do it without losing control of her speakership.

Meaning that internal Democrat politics is what’s dragging the country through an impeachment crisis that nobody outside of the Democrat Party wants. How’s that going to play out in next year’s elections?

Trump’s is now demanding a vote on impeachment. His 2020 campaign manager Brad Parscale said this today…

“We are less than a year away from Election Day 2020 and Democrats can’t possibly explain to the American people why they want to take the decision of who should be president out of the hands of voters. But impeaching the President has always been their goal, so they should just get on with it so we can have a fair trial in the Senate and expose The Swamp for what it is. Speaker Pelosi, Chairman Schiff, and Hunter Biden should testify, and then we can get back to the business of our country.”

This is the real reason why Pelosi’s announcement today was such an own goal. When the Democrats vote the process over to the Senate, which they will do without a single Republican vote (and they’ll need almost all of their own people to do so, many of whom are representing swing districts which could very easily flip back to the Republicans next fall particularly given the staggering sums of money the Republican Party is raising to take back the House), they completely lose control of that process.

At that point it becomes the province of Mitch McConnell and the Republican majority in the Senate, and McConnell can do with an impeachment trial whatever he likes and has a majority for.

Which can, should and likely will include Parscale’s demand that Pelosi and the Bidens testify. But not just them. McConnell can demand that Adam Schiff testify, and he should. He should also demand that the “whistleblower,” a Democrat operative at the National Security Council named Eric Ciaramella whose name is for some reason not to be spoken in official channels, be forced to testify.

But what McConnell also should do is to use the impeachment trial as an opportunity to hash out all of the political scandals of the past four years in front of the American people. He should include the abuse of FISA warrants in the Carter Page case, a relatively clear violation of an American’s civil rights. He should include the cover-up of Hillary Clinton’s e-mails. He should include the new revelations that a convicted pedophile illegally funneled foreign money into Clinton’s 2016 presidential campaign. He should include the DNC’s rigging of its presidential primary in Clinton’s favor. He should include testimony from James Comey, James Clapper, John Brennan, Loretta Lynch, Samantha Power, Susan Rice, Ben Rhodes and even Barack Obama himself. He should insure that a full vetting of foreign meddling in U.S. elections be had – to include Chinese meddling, and what effect, for example, the $1.5 billion in equity capital Hunter Biden received suspiciously close to his father’s trade mission to that country in 2015 might have had on U.S. policy or presidential politics.

Mitch McConnell should open the Senate’s impeachment trial sometime in late January, after digesting the House’s articles of impeachment, and insure that it lasts into April.

Mitch McConnell can and should use the impeachment trial to make the Democrat presidential primary come down to Pete Buttigieg and Mike Bloomberg, and to so damage the Democrats politically for the abuses and blatant political sabotage of the Trump presidency they’ve attempted that the 2020 election is such a foregone conclusion that it reverberates down the ballot across the country.

There is no reason McConnell shouldn’t use it to every possible political advantage. If Pelosi is stupid enough to attempt to run an impeachment through the House with no bipartisan support at all, and the country sees this kangaroo court for what it is, then no one can complain when McConnell plays the whole thing back into her face.

And the fact is, McConnell’s voters will demand that he does. Certainly Trump should, because it will be Trump who can call the abovementioned people as witnesses.

Interested in more national news? We've got you covered! See More National News
Previous Article Louisiana K-12 school spending estimated at $9.7 billion in 2018-19, NEA reports
Next Article PERRICONE: Now Is The Time For All Good Men To Come To The Aid Of Their Country