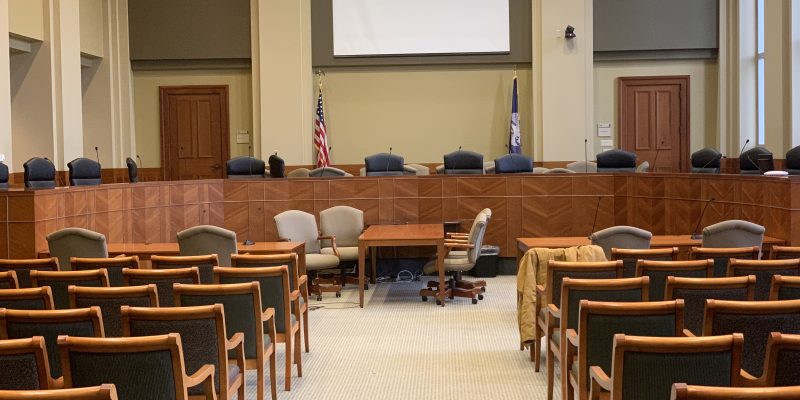 The State of Louisiana has established law surrounding the ethical behavior of elected officials. At Friday morning’s meeting, they’ve now established a new precedent that exempts government from the same oversight aggressively applied to its citizens.

According to Section III F, “The Code of Governmental Ethics prohibits the participation by a public servant in a transaction involving the governmental entity in which [the public servant has] a substantial economic interest.” It goes on to prohibit participation for “any person who is indebted to him or is a party to an existing contract with him and by reason thereof is in a position to affect directly his economic interests.”

Based on these rules, any normal person would assume that an elected official should not vote to give money to his employer .Doing so would be a glaring conflict of interest.

Now, go back and look closely at what I’ve bolded above. Sheriff Mark Garber is a party to a contract with Lafayette City-Parish Councilman Kenneth Boudreaux. That contract pays councilman Boudreaux $66,000 cash, plus the use of a brand new Chevy Equinox including all maintenance and fuel. This puts the Sheriff in an unequivocal position to affect directly Kenneth Boudreaux’s personal economic interests.

Kenneth Boudreaux voted to give his employer money – multiple times

In just the last few months, Councilman Boudreaux has voted to give his employer, the Sheriff, large sums of money at least twice. Of the $2.3 million originally proposed, he was finally successful in getting $401,546 for the Sheriff with the very last vote at the very last meeting of the Lafayette City-Parish Council – forever. That was under ordinance O-261-2019, which was originally written by Boudreaux himself, for $601,546. At the meeting, it was pared down to $401,546 before final approval.

The previous time was during the September 5th budget meeting that amendment number eight to budget ordinance O-134-2019 was voted down. That item had been introduced by Jay Castille and discussed at some length back on August 29th (video here, starting at marker 31:29 and concluding after an hour at 1:32). The purpose of that amendment was to move $1,752,769 from the parish courthouse maintenance fund to the Sheriff’s office. While Kenneth Boudreaux didn’t introduce this budget amendment himself, he certainly took a lead position during discussion of the the proposal. He also supported the measure with his vote during the September 5th meeting.

On September 4th, Councilman Boudreaux submitted an emergency opinion request to the Louisiana Board of Ethics. Because the board serves part time, a board attorney reviewed the request and replied quickly on September 5th. Because the board did not review the opinion, they were required to do so when time permitted.

That time was Friday, December 20th, at about 10:00 am. Although there was a little discussion, the Louisiana Board of Ethics matter-of-factly accepted the opinion issued by the staff attorney without objection. That opinion declared that Sheriffs are not people. Therefore, a councilman who is employed by any sheriff across the entire state of Louisiana may now freely use their position as councilman to direct monies to their employer.

Here’s the conclusion of that original opinion:

Based on the information provided, the Code of Governmental would not prohibit you from participating in matters before the city-parish council involving the amendment to provide additional funding to the Sheriff’s office for the correctional center. Since your contract is to provide services to the Sheriff’s Office, which is not a “person” as defined by the Code, and your funding of your contract is unaffected by the funding from the city-parish, you are not prohibited from participating in matters as a city-parish councilman involving the appropriation of funds for the correctional center.

According to the contract document, Councilman Boudreaux was hired by the Sheriff in his tenth year as a parish councilman. That the board has now issued an opinion allowing parish councilmen to vote money from the parish treasury to the governmental body who employs them, look for every municipal and parish authority to start hiring councilmen.