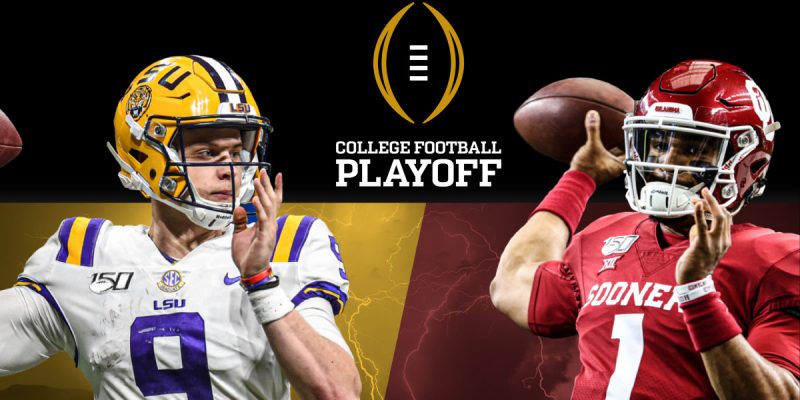 There is an old adage in sports, which pops up often when an underdog team defeats the favorite, that “that’s why you play the game.”

Then-head coach of the New York Jets Herman Edwards famously and emphatically said back in 2002, “You play to win the game.”

The two sayings don’t exactly relate all that much, but there is a link here, going into the 2019 College Football Semifinal matchup between LSU and Oklahoma. Top-ranked LSU is the heavy favorite–at a whopping 13.5 points–but Oklahoma will definitely be playing the game.

And they will definitely be playing to win.

Yes, if things on paper go according to this year’s trends, LSU should win, and they should win comfortably. The Tigers have beaten five top-ten teams this year in Texas (on the road in Austin, when the Longhorns were still relevant, and good), Florida, Auburn, Alabama (on the road), and Georgia (at a “neutral site” in the Bulldogs’ home state). Oklahoma has only one such win over No. 7 Baylor. In addition, they beat Baylor one other time on the road earlier in the season when the Bears were ranked 13th, and they defeated Texas in Dallas when the Longhorns were ranked 11th.

Perhaps the biggest reason to believe in the Tigers this Saturday, though, is the sheer dominance they have displayed over much stiffer competition. LSU ranks fourth in average scoring margin at +24.6. The Sooners rank twelfth at +15.6. This includes a loss to a very average Kansas State team and a 42-41 home scare to another very average Iowa State team.

The Sooners needed extensive help to reach the playoffs. LSU could have lost the SEC Championship Game and still gotten in. Ironically enough, the Sooners were the biggest Tiger fans outside of Louisiana for that game, for it was Georgia’s loss to the Tigers that allowed the final push for Oklahoma to get the four-seed.

After that SEC title game, when LSU was still ranked No. 2 behind Ohio State, head coach Ed Orgeron was asked if the Tigers deserved the No. 1 billing going into the playoffs. His reply: “We don’t know. I told the team it doesn’t matter. It doesn’t matter where they rank us or where they tell us to go. We’ve got to win the next game, and that’s all that matters.”

In a later interview, he’d say yet another correct thing when a reporter asked him if the team was the best in the country: “We don’t know that yet.”

How true it is. Yes, LSU has been the best team in the country this year. But they have to prove it for two more games. They have to leave the trophy case full of individual awards and accolades behind and focus on handling the business in front of them. If they do that, they will win Saturday and play in their fourth national title game in the last seventeen seasons. If they don’t, an Oklahoma victory is not out of the question, and would tarnish perhaps the greatest regular season of football in LSU history.

That is why you play the game. Now go win it, Tigers.