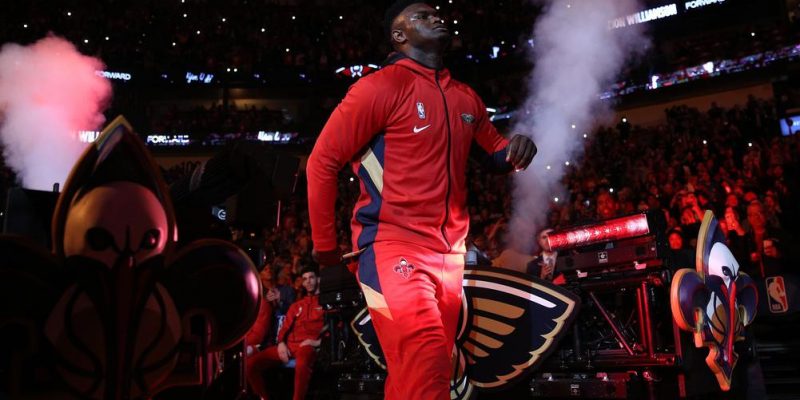 No, basketball is not football in the city of New Orleans. The Pelicans are not the Saints and Zion Williamson is not Drew Brees.

But last night was fun. It was fun to imagine what the Smoothie King Center could become. It’ll never be the Superdome in the middle of a Saints playoff run, but still…

If this once-in-a-generation rookie continues to electrify as he did last night, the Pelicans will no longer be a forgotten commodity in town.

And he’ll make Pelican fans quickly forget about another former No. 1 pick who wanted out of town so badly.

Zion Williamson, the No. 1 pick in the 2019 NBA draft, made his regular season debut Wednesday night, with a league-wide anticipation unrivaled since LeBron James’s debut in 2003. Zion finished with what will one day be considered a pedestrian 22 points on 8-of-11 shooting, seven rebounds, and three assists to go along with five turnovers. And the Pelicans lost the game, 121-117.

But the loss and the final statline isn’t what anyone is talking about.

What they are talking about, raving over, gushing over, is the 19-year-old’s three-minute stretch in the fourth quarter in which he scored 17 straight points. 17 straight. The electric run brought the Pelicans back from 12 down at the start of the quarter and gave them the lead late in the game.

Then reality and the proverbial pitch count reared its ugly head. Zion has been recovering from knee surgery, which has pushed his debut back 44 games. Head coach Alvin Gentry, burdened with the decision to leave Zion in or take him out, twice brought would-be substitutes back to the bench from the scorer’s table because his dynamic rookie was playing so well.

But finally, it had to happen.

“And no, he couldn’t go back in the game, so don’t go there,” Gentry said to finish his opening statement. “Just because the medical people said that was it.“

It was the words of a man who knew he had to sacrifice one game and one unbelievably dazzling show for the sake of a young man’s career, and potentially, a franchise.

Like the Big Easy partisan crowd, Zion was not at all concerned in that moment about medical restrictions.

They all just wanted more.

It was tough because it is rare for a player to hit that unstoppable of a stretch. It was a scoring binge that was, dare I say, Michael Jordan-esque, in all its rush, its electricity, its sheer game-transforming power.

In that three-minute stretch, Zion hit four three-pointers and two short-range buckets. One came on a play that showed the rookie’s burst, energy, and sheer hustle, as he outmaneuvered everyone to rebound his own miss and score on a reverse layup.

It was the kind of heart and hustle that a small market city like New Orleans will grow to love.

This is why Saints and New Orleans hero Drew Brees want to pass on the torch. It’s not just about this kid’s talent. It’s his charisma and charm with the media. It’s his warlike, never-say-die attitude on every single play he is involved in.

The kid seems to pour his heart and soul into every single play.

And the Smoothie King Center crowd was loving it like it was 2009 in the Superdome again.

“Just the energy the crowd brought, the energy the city brought, it was electric, and I’m just grateful that they did that,” Zion said. “It was a dream come true to finally get out there; but at the end of the day, I did want to win, so just got to look to next game.”