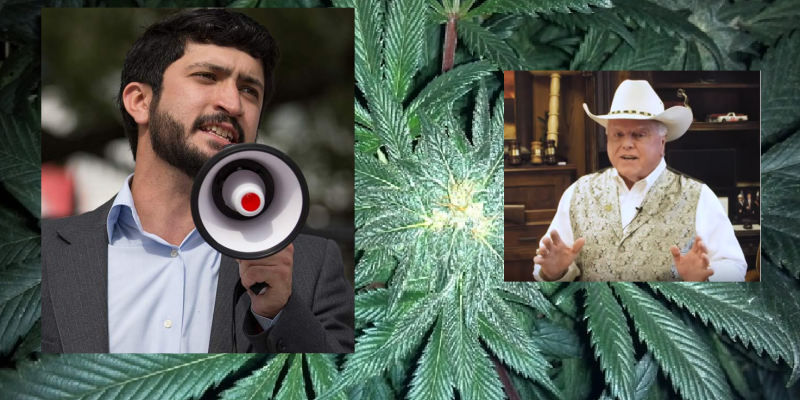 The Texas Department of Agriculture is on the verge of approving new rules following a major hearing on industrial hemp and a farmer’s convention calling for reform to USDA rules.

Meanwhile, Texas’s capital city prepares to discuss a plan to decriminalize low-level marijuana cases and make it difficult for officers to determine between industrial hemp and pot — with the effect of essentially decriminalizing marijuana possession.

Safe to say, cannabis is a burning issue this week. That may be why conservative Republican Texas Agriculture Commissioner Sid Miller chose this week to release “a little straight talk” for hemp farmers anxiously awaiting the new rules, giving entrepreneurs clarity to proceed with their plans.

Commissioner Miller’s video, released Wednesday, may be viewed below:

Miller said the federal 2018 Farm Bill lifted restrictions on producing hemp, and Texas’s HB 1325 in 2019 directed the Texas Department of Agriculture (TDA) to develop a program.

“… I’m not going to add any more restrictions than are necessary,” Miller said. “Hey look: I’m not going to put Texas at a disadvantage over other states. In my hemp program, I’m going to make sure that Texas farmers are protected and they prosper.”

Aside from current concerns that hemp farmers could be arrested for (intentionally or inadvertently) growing marijuana, Miller warned there are other risks involved in the trade. He listed several steps prospective hemp farmers can follow to avoid running afoul of new state and federal regulations, as well as the usual environmental shifts given the unpredictable Texas weather. There is also an expected market saturation, so Miller urged hemp farmers not to sink in more money into their operations than they can afford. No pesticides have been approved for applying to hemp, Miller also advised.

Miller’s comments follow a major meeting on Wednesday in Waco to take public comments on the proposed new rules. More than 200 people attended according to local media. The proposed rules were posted Jan. 10.

On Sunday, President Donald Trump spoke to the national Farm Bureau convention at the Austin Convention Center, in which delegates urged change to the USDA rules.

Among many proposals, delegates urged the feds to give hemp farmers the opportunity to have crops retested if the level of tetrahydrocannabinol (THC) is too high, rather than being immediately destroyed by agents. They also wanted farmers to have the option of destroying crops that cross the line between industrial hemp and marijuana.

Meanwhile down the street, Socialist-friendly Austin City Councilman Greg Casar is today sponsoring a city resolution that would effectively discourage the city from purchasing new testing kits to distinguish marijuana the drug from industrial hemp. Casar’s resolution will also begin a process of stopping arrests and citations for small amounts of marijuana in the city. His resolution is supported by four of the Council’s 10 members.

But Austin Police Chief Brian Manley said this is not a Council decision: “The City Council does not have the authority to direct APD not to enforce a state law,” he said, via Twitter.

Chief Manley is correct in that the city may not willy-nilly decide not enforce the law. However, there are many things the city of Austin and local entities can do, theoretically, to stymie enforcement short of a legal challenge to the law. In Dallas County, the District Attorney directed officers that enforcement of marijuana laws is no longer a priority and gave officer’s discretion. It would seem Casar is headed this direction.

In July, Travis County prosecutors started refusing all possession cases brought forward without lab work in lieu of the new state regulations. The problem is, the APD has yet to come up with a workable plan for field marijuana testing.

Casar’s resolution, according to the left-leaning Austin Chronicle, would actually block funding for the field tests (or outsourcing unless it involves felony-level cases). Casar’s rationale: “When APD understands that there’s not going to be a test, then they’ll understand that there’s really no point to making an arrest.” In other words, the resolution would make arrests non-enforceable due to zero evidence.

Regardless of Casar’s goals, the Austin City Council would be wise to take a look at the new state rules and any changes to USDA regulations recommended by Farm Bureau before finally embarking on a new marijuana policy.

Interested in more news from Texas? We've got you covered! See More Texas News
Previous Article When a newspaper publishes a cartoon depicting a conservative leader as a lynchman it’s time to say enough is enough
Next Article 17 STRAIGHT: Zion Electrifies New Orleans in Pelicans Debut