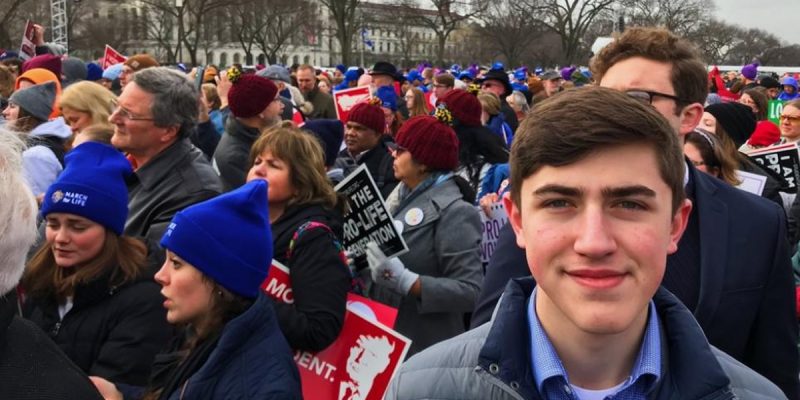 A year ago the annual March for Life was marred in controversy due to an incident that constituted one of the most malicious acts of big media malpractice committed against a private citizen since the infamous Richard Jewell frame-up.

Naturally  the sensationalist rigged media left the black militants, who were later charitably described as engaging in “street preaching”- they were actually hurling racially charged violent language towards high school students- completely out of the initial “hot take” transmitted across the globe via CNN, the Washington Post, the New York Times, et al, and the whole matter was encapsulated with the image of a “smirking” 16-year old Nick Sandmann facing off with the discredited Phillips, who underwent a Big Media make over.

Eventually more comprehensive information and footage followed in the wake of that moment and the Fourth Estate was compelled to gingerly walk back a narrative of their own self-produced fantasy but not before death threats were made towards Sandmann and the Catholic school he attends was forced to temporarily close because of the threats.

Sandmann, after being wrongly browbeaten in public by his own church, began filing lawsuits and thus far CNN came to terms on a settlement.

The big question that followed was whether the incident was a strategic victory for the Confederacy of Leftist Dunces by targetting school kids without profile for slander and abuse and thus motivating parents to not allow their kids to participate in the largest issue-oriented protest in the country?

A glimpse of the march accelerated video posted on line provided a clear answer: they’re there FOR Life.

Including Sandmann, who tweeted out his presence at the march.

I’ve attended both the March for Life (as a participant) and as an observer at the post-Trump inauguration Women’s March (which should be more accurately called “The March for Non-Refundable Premature Hotel Bookings”) and the differences between the two gatherings could not be any more distinct.

The overarching sentiment of the March for Life is that of joy. The diverse crowd that traveled on buses from around the country are there to stand up for human dignity and science. And despite the fact they are opposing the ghastly procedure that is abortion, you do not sense anger from the masses but compassion.

In glaring contrast the Women’s  March was full of anger, hate (none of the speakers at the Life rally advocated blowing up public buildings), and most prominently a showcase of the crass and crude, from those lovely knit hats made to resemble a vagina (how come you don’t see those anymore?) to the full body vagina suits produced in great “follicular” detail.

And then there were the signs that could’ve served as cue cards at a Redd Foxx blue stand up performance.

And like good stewards of the environment, the Women’s Marchers littered the sidewalks of Washington with their potty-language scrawled posters at the conclusion, creating both a refuse issue and a slipping hazard.

In yet another contrast, The March for Lifers took their signs home or neatly deposited them in bins. I saw maybe a handful on the ground during the mile long stretch between the White House and the Supreme Court.

One noticeable difference between this March for Life and previous ones was it was decidedly more Trump-oriented, and for good reason, as the president had stocked the federal courts with pro-life jurists and for the first time a sitting president personally addressed the march.

Many of the marchers wore MAGA hats and shirts (even though students in many schools were explicitly told not to) making it a banner day for the hawkers of knock-off Trump apparel. Perhaps this was a show of solidarity with Sandmann…or maybe some were hoping to score some potential Big Media settlement money from Jeff Bezos’ newspaper.

There were also signs in the crowd touting Trump as the most pro-life president ever, an undeniable claim.

After having been subject to villification and doxxing in the press last year, the March for Life has endured that critical test and once again resumed its previous marginalized status with low-balled attendance and a dismissive coverage by the establishment media.

Roe v Wade will be evicted from the steps of the US Supreme Court before the advocates for protecting human life in its most vulnerable form are.