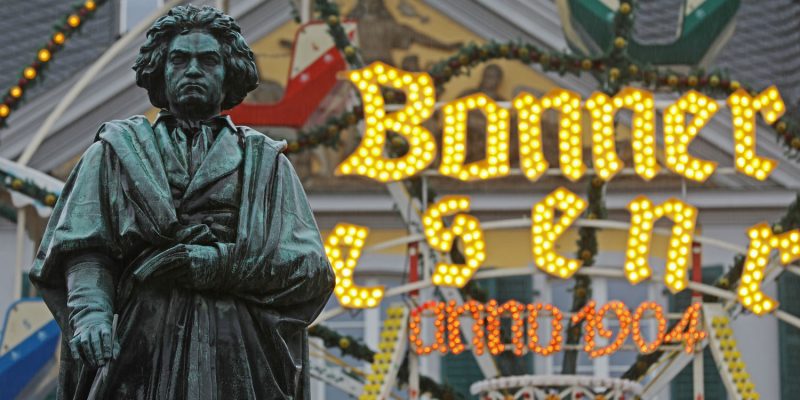 Classical music composer extraordinaire Ludwig van Beethoven would have been 250 years old this year, and is being marketed by Germany’s news weekly Der Spiegel as a “a 250-year-old pop star.”
To celebrate the musical mastermind’s life, Germany is celebrating this year with more than 700 events. Visitors from all over the world are expected to attend.
Many from Europe are expected to participate in the numerous events. In 1974, the prelude to “Ode to Joy”, 4th movement of Beethoven’s 9th symphony became the European Anthem in 1972, and the anthem of the European Union in 1993.
German Chancellor Angela Merkel referred to preparing for the anniversary as a “national duty.” Preparations began as part of a coalition agreement between Merkel’s Christian Democrats and the Social Democrats in 2013.
No one knows when the composer’s actual birthday was. There is only a record of his baptism on December 17th 1770, in Bonn, Germany. Some speculate because of this, he was born the day before.

The recently renovated Beethoven House Museum in Bonn will reopen to the public on Dec. 16 as a museum to celebrate on what many believe is his actual birthday. The museum will include an exhibition with scores and instruments and the notebooks he used to communicate after he went deaf in 1801 (26 years before he died).

But before then, visitors can travel to Germany and Austria to participate in numerous festivities.

From Germany’s The Local:

February 1: The State Opera in Vienna is performing Beethoven’s only opera “Fidelio.” The composer lived in Vienna at the beginning of the 19th century.

March 16: German-Austrian actor Christoph Waltz, who works mainly in the U.S, will stage “Fidelio” at Theater an der Wien in Vienna, where the opera was first performed in 1805.

April 25th and 26th: Berlin is hosting a 24-hour “Beethoven Marathon” by the Berlin Philharmonic Orchestra.

April 28th: A hypothetical version of Beethoven’s unfinished Tenth Symphony– completed by artificial intelligence– will be performed in Bonn.

May 16th: Kraftwerk is performing an open-air concert in Bonn.

December 17th: A concert will be held in the parliament building in Bonn.

Interested in more national news? We've got you covered! See More National News
Previous Article DRAWING NEAR: Tigers’ Moment of Truth is a Heartbeat Away
Next Article PERRICONE: Iran, John Kerry And Pallets Of Cash Money