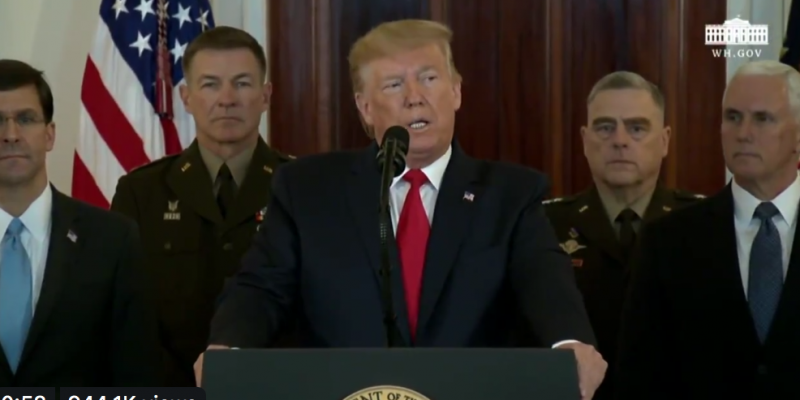 In the past week, there has been much discussion on War Powers, the President’s authority as Commander-in-Chief, and the surrounding effort to combat Iranian aggression. A brief examination of history shows that President Trump is on sound legal footing and that his decisive actions have strengthened the U.S. position.

The President of the United States maintains broad authority to defend American personnel and interests against foreign threats. President Trump’s lethal strike on Qassem Soleimani, one of the world’s most dangerous terrorists, was well within his authority as Commander-in-Chief. The President operated squarely within the authority enumerated in Article II of the Constitution, the War Powers Act of 1973, and the 2002 Authorization for Use of Military Force (AUMF) in Iraq.

Congress last issued a formal declaration of war in 1941. Since then, Presidents Truman, Eisenhower, Kennedy, Johnson, and Nixon oversaw extensive military operations in Korea and Vietnam strictly under the powers of Article II. The debate over those prolonged conflicts produced the War Powers Act in 1973 as Congress overrode Nixon’s veto with more than a two-thirds vote in both the House and Senate. While the War Powers Act mandates that the President report the use of military force to Congress, it maintains the broad authority of the Executive to conduct military operations. Both Operation Desert Shield and Operation Desert Storm were conducted under the authority of the War Powers Act, Article II Constitutional powers, and the 1991 AUMF. Following 9/11, Congress passed the 2001 AUMF, approving military action against the responsible terrorist parties. Congress then approved a second AUMF in 2002 regarding threats emanating from Iraq. Those authorizations of force remain active.

Specifically, the 2002 AUMF authorizes the President to take direct action regarding security threats and enemy combatants inside Iraq. President Obama cited both the 2001 and 2002 AUMF as statutory means to address terrorist threats like ISIS and to direct 571 drone strikes, including targets across the Middle East.  The criticism that President Trump’s authorization of force is somehow different is absurd. Soleimani was a brutal terrorist commander.  He was on the battlefield, engaged in an active effort to threaten and attack American interests. Having seen the classified intelligence briefing, I’m confident that President Trump made the righteous decision.

House Democrats’ efforts to restrict the President from taking defensive action against Iran are misguided and driven by their hatred of President Trump. The President’s ability to act swiftly and decisively is critical for operational success. This is especially true as the theater of engagement evolves and modern technology reshapes how missions are conducted. House Democrats’ non-binding War Powers Resolution only emboldens our enemies by saying that military action against Iran is off-limits and weakens the President’s ability to protect U.S. interests. This is not to say that military action is the preferred response, but all options should be at the Executive’s disposal.

Iran and its proxies have fomented violence against U.S. personnel and interests for more than 40 years. In recent months, Iran has grown even bolder in its aggression toward the United States and other Western nations. This includes Iranian attacks on commercial shipping vessels in May and June 2019, the destruction of a U.S. drone in international air space, the seizure of a British-flagged oil tanker in July, and a series of missile strikes on Saudi oil and gas facilities in September. Following that escalation, Iran and its proxies carried out a rocket attack on December 27, killing a U.S. contractor and wounding four American service members in Iraq. Iranian-backed militia forces stormed the U.S. embassy in Baghdad days later. These acts of war were coordinated by Soleimani. I personally think it’s a good kill when America disintegrates a notorious, evil, jihadist terrorist commander and his terrorist pal. There should be no confusion. The fanatical regime in Iran is the aggressor.

In my opinion, any appeasement towards the jihadist Iranian regime should end. The actions of President Trump make America safer. We seek peace, and we will continue both formal and back-channel diplomacy, however, we shall not bow down to these terrorists. Iran now understands that the United States is prepared to defend our line in the sand. We will not allow Iranian provocations to continue unchecked. We will not sacrifice the safety and security of Americans. Because of the President’s decision and the expertise of our service members and the U.S. Intelligence Community, the world is rid of two dangerous terrorists. The Iranian regime and its network of terror have been weakened.

As we move forward, we do so from a position of strength, with an eye toward diplomatic solutions, and having achieved a key victory in the effort to combat terrorism.

Congressman Clay Higgins (R-LA) represents Louisiana’s 3rd District in the U.S. House of Representatives. He serves as a member of the Homeland Security Committee and the Oversight Subcommittee on National Security.