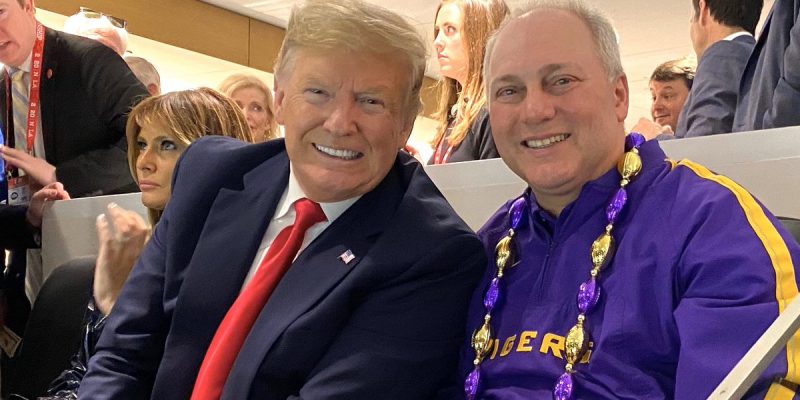 A press release from the office of House Minority Whip Steve Scalise shows that he has cracked the code on campaign fundraising, and people considering handicapping House races across the country might want to keep his numbers in mind…

Whip Scalise’s grassroots fundraising operation had its biggest quarter yet, raising more than $4.45 million in small-dollar donations and bringing the 2019 total to more than $10.3 million. This impressive number includes 277,045 donations from 94,493 donors in all 50 states with an average donation size of $37.35.

“Now that we’re officially in 2020, it has never been more important for Republicans to stand together, defend our President, and do everything it takes to win back the House majority. The last year of Democrats in charge has been nothing but chaos — Nancy Pelosi, Adam Schiff, and the entire Democratic caucus have proven that they’re willing to sacrifice any progress made and blatantly ignore the will of the American people as long as it brings them closer to what they really want: President Trump out of office. It’s time to end this charade — we can’t afford another two years of their complacent leadership,” said Whip Scalise. “I look forward to continuing working closely with President Trump this year to finish out the cycle strong, win back the House, and keep making America great.”

The thing to remember here is that Steve Scalise is probably the most popular Republican figure on Capitol Hill, and he’s likely the most popular politician in the House of either party. Scalise has the story of having come back from a near-fatal gunshot wound from a Bernie Bro not dissimilar to that idiot who showed up on James O’Keefe’s latest expose’ video, and he’s a very charismatic figure who, the James Hodgkinsons of the world notwithstanding, is liked on both sides of the fence. He’s also closely associated with President Trump, whom he sat next to at the National Championship game Monday night. So Scalise has star power most Republicans on Capitol Hill don’t.

But an incumbent Congressman raising $21 million in an off-year when he’s not expecting a contested race? Has anybody ever heard of that? It blows away the numbers he was raising in 2018, which made national news then.

Of course, Scalise isn’t raising money to insure he beats Jim Francis, or Tammy Savoie, or whichever other sad-sack loser the Democrats run against him. That money is intended to be used to help other Republicans either hold or gain seats, because the number one mission the GOP has this fall, aside from making sure Trump holds on to the White House against whichever sad-sack loser the Democrats run against him (and right now that might well be the wrinkled old commie the Bernie Bros are willing to kill for), is to take the House back from Nancy Pelosi and her cringeworthy cabal of Peach Mint eaters.

The fact that Scalise alone was able to raise $21 million should tell you there is an immense amount of enthusiasm for doing just that. It should tell you what a disaster impeachment is for the Democrats, even though they might not realize it. And it should make you suspect of the inevitable babbling the mainstream media will subject you to over how Republican hopes to retake the House are fading.

We don’t know anything yet. But if you look, you’ll see lots of signs that this fall’s elections will be a disaster for the Democrats. Scalise’s fundraising numbers are one of them.