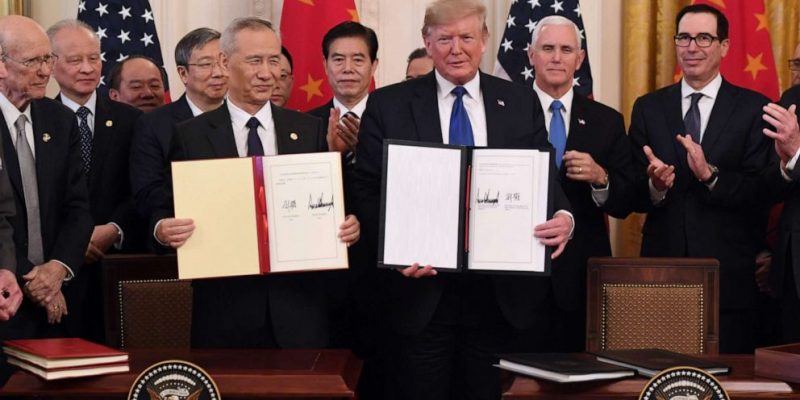 President Trump yesterday signed a new trade agreement with China, signaling the official end of the trade war that the President said was necessary to restore fair trade relations.

It was a bet that is now paying off as the pact is expected to boost the US economy by an estimated $200+ billion over the next two years, including $40 billion in American agriculture.

The deal includes the relaxing of US tariffs on China and a commitment from Beijing to cooperate in stopping intellectual property theft and ceasing currency manipulation practices.

In a White House signing ceremony, the President said negotiations were “tough, open and honest”, adding that the deal will help “deliver a future of economic justice and security for American workers, farmers, and families.”

Vice President Mike Pence joined the President at the podium calling it, “a good day for America, China, and the world”.

“One of the greatest trade deals ever made! Also good for China and our long term relationship. 250 Billion Dollars will be coming back to our Country, and we are now in a great position for a Phase Two start. There has never been anything like this in U.S. history! USMCA NEXT!”

“Under our guidance, China-US relations will deliver more results and bring greater benefits to our peoples in the year ahead.”