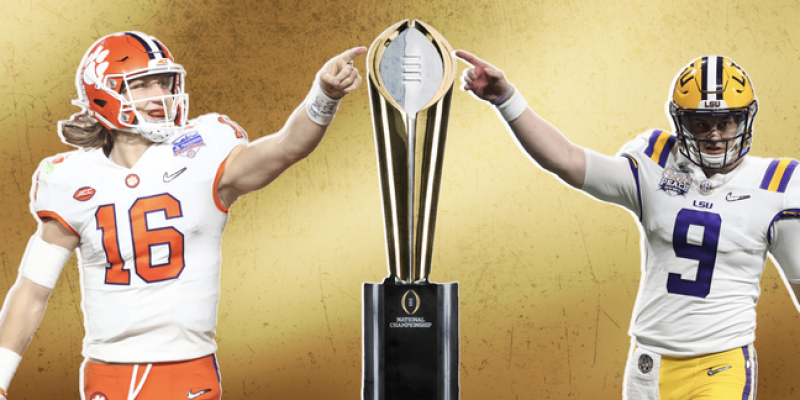 This week I’ve had correspondence from several of you outraged that the biggest thing to come down the pike in Louisiana over the past eight years, namely, LSU playing in the national championship game against Clemson, is about to happen and I haven’t written anything about it.

And there’s a reason for that. Which is that I’m basically too terrified of seeing LSU lose that game to even want to think about it.

I haven’t felt this way forever. It began on Sunday, when the Saints stunk up the Superdome and found a way to lose to an inferior Minnesota Vikings team in the wild card round of the NFL playoffs. For some reason, Minnesota has a way of sneaking past Sean Payton when he doesn’t have his team ready to play, and that was certainly the case last week.

It’s not that the Saints and LSU are the same. They’re not. But watching Payton and the gang manufacture a loss against the Vikings planted the seed in my head which won’t go away and keeps growing.

Rationally, I don’t really believe that. I’ve compared LSU’s resume to Clemson’s, and the two simply don’t match up. They’ve played one common opponent – Clemson beat Texas A&M 24-10 in a game that was much more a display of A&M’s offensive dysfunction and Kellen Mond’s inaccurate passing than it was about much Clemson did, while LSU absolutely took A&M to the woodshed in a 50-7 rout.

Clemson did have a very impressive 62-17 blowout win over Virginia in the ACC Championship game, and certainly their close victory over Ohio State two weeks ago proves they belong in the national championship game. And while their ACC schedule was unmitigatedly awful – the ACC was, on the whole, probably a worse football league this year than the American Athletic Conference was, and thus barely even qualifies for inclusion in the Power 5 (I’m not disparaging that conference on the whole, mind you; I’m just saying that after Clemson this is about as down in football as it’s been since its current alignment) – Clemson took care of business against those teams. Only North Carolina gave them much of a game during their run through that conference.

But compared to what LSU did? Winning on the road at Texas, which showed in their blowout of Utah that when healthy they were a pretty tough team. Beating Florida by two touchdowns in a game that could have been much, much more lopsided (go watch that game over again and notice how many breaks the Gators had to get just to stick around). Beating Auburn, which was not an easy thing to do (and that was another game where LSU overcame bad break after bad break). Beating Alabama in Tuscaloosa. Blowing out Georgia in Atlanta. And laying such a rout on Oklahoma that they’re still coming up with new records LSU set in that game.

LSU has beaten no less than six teams ranked in the Top Ten at the time the Tigers played them. If they knock Clemson off it’ll be seven, and that’s never been done. I’m not sure that six has ever been done.

Go down the lineup, and other than at a few positions LSU has an advantage almost everywhere personnel-wise. LSU has five potential first-round NFL draft picks in Joe Burrow, Kristian Fulton, Grant Delpit, K’Lavon Chaisson and Justin Jefferson, while Clemson only has three in Isiah Simmons, Travis Etienne and Tee Higgins. Burrow has shone more brightly this year than Trevor Lawrence. Clyde Edwards-Helaire’s numbers are almost a match for Etienne’s; factor the increase in schedule difficulty and they’re not dissimilar. Jefferson, Ja’Marr Chase and Terrace Marshall put up far better numbers than Higgins, Justin Ross and Amari Rodgers this year, and Clemson doesn’t have a tight end remotely close to Thad Moss as a receiver. LSU’s offensive line was rated the best unit in the country, which ranks them above Clemson’s. Clemson’s defense has put up better numbers than LSU’s has, but if Dave Aranda had spent the whole year coaching this team to face the likes of Georgia Tech, Charlotte, Louisville and NC State it’s a pretty good bet his stats would have been prettier.

It’s not that I think Clemson beats LSU. It’s the concern about what this state will look like if that happens.

Can Louisiana, which by the way hasn’t been doing so well lately in the things which matter more, though perhaps impact our collective psyche less, than football, survive having the Saints and LSU both collapse in the space of eight days?

I really don’t know. Frankly, I’ve been scared to think about it since Sunday.

And don’t tell me to get a dog. I have a dog. What I need is a championship win by the LSU Tigers on Monday night. We all do.