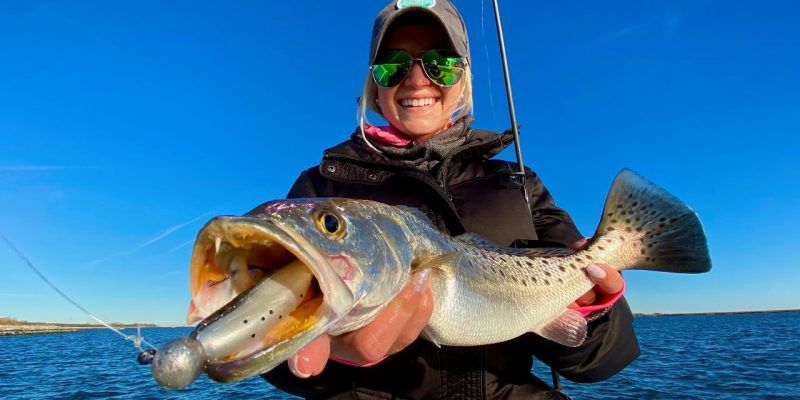 In the late winter, speckled trout get notoriously picky, and anglers often have to resort to finesse tactics to put them in the boat. What Capt. Justin Bowles has been doing lately with great success is rigging up drop-shots, and sending them into deep water to pull up some surprisingly nice specks.

He and I put the technique to good use last week while fishing the Mississippi River Gulf Outlet with special guest Cami Mantilla. A Slidell resident, Mantilla has gained national fame through her Instagram page (@cami_cakes_), which has attracted more than 320,000 followers.

She fishes regularly, targeting speckled trout, redfish and bass throughout Southeast Louisiana and a host of other species in Bermuda, Puerto Rico and around the globe. Despite some tough conditions, she definitely demonstrated her prowess on her day out with us.

Mantilla stuck with a salt-and-pepper-colored H20 Xpress throughout the day, but Bowles and I frequently threw the drop-shot rig. He ties it with a VMC SpinShot hook, which includes a swivel at the eye of the hook. To that, he ties a 3- to 4-foot length of fluorocarbon with a 3/8-ounce Deathgrip Jighead and Matrix Shad soft-plastic paddletail at the end. On the SpinShot, he pierces a Zoom Tiny Fluke, PowerBait Pro Twitchtail Minnow or Matrix Mini through the nose of the bait.

He said he catches about 90 percent of his fish on the top lure.

Check out all the details in the video below.

Like the video? Please give it a thumbs-up, and subscribe to the Marsh Man Masson channel on YouTube. Also, leave a comment below. Have you ever used a drop-shot rig to catch speckled trout? Do you like the technique? If not, what are some of your favorite ways to get late-winter speckled trout to bite?

Interested in more news from Louisiana? We've got you covered! See More Louisiana News
Previous Article OWEN: Why Not Louisiana? Why Not, Louisiana? (Part 1)
Next Article New California eliminates 1099 workers, saying they have to be hired as W2s, instead thousands lose income