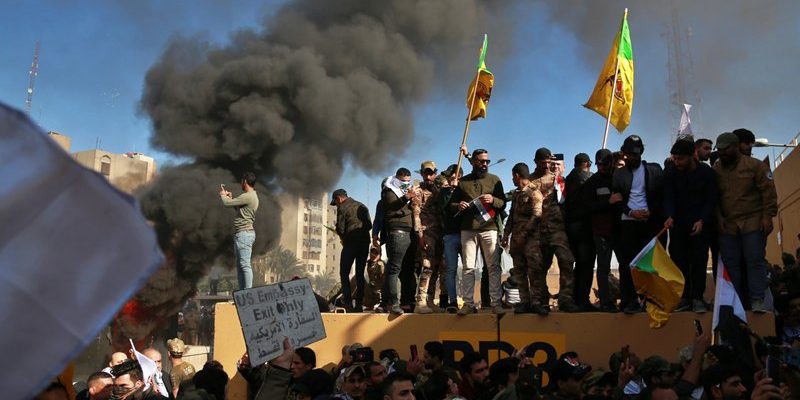 As many Americans celebrated New Year’s Eve, US forces in the Middle East were placed on high alert as hundreds of rioters stormed the US Embassy in Iraq.

The incident opened an old wound in the American psyche, bringing back memories of the tragedy in Benghazi, Libya when several American heroes lost their lives in a similar attack.

Tensions between the US and Iran reached a fever pitch Tuesday as President Trump blamed Iran over the killing of an American contractor and for the ongoing attack on the embassy, responding by deploying 100 Marines and two Apache helicopters to pad security.

President Trump dubbed the incident “The Anti-Benghazi” on social media and kept the American people apprised of the situation explaining,

“Iran killed an American contractor, wounding many. We strongly responded, and always will. Now Iran is orchestrating an attack on the U.S. Embassy in Iraq. They will be held fully responsible…”

The President reassured the Nation that the Embassy was safe yesterday afternoon and issued a “threat” to Iran saying,,

“The U.S. Embassy in Iraq is, & has been for hours, SAFE! Many of our great Warfighters, together with the most lethal military equipment in the world, was immediately rushed to the site. Thank you to the President & Prime Minister of Iraq for their rapid response upon request. Iran will be held fully responsible for lives lost, or damage incurred, at any of our facilities. They will pay a very BIG PRICE! This is not a Warning, it is a Threat. Happy New Year!”

The American people took a sigh of relief Wednesday morning as reports that the rioters had dispersed began coming in. It is not only a victory for the US but also for the President as the end result stands in stark contrast to the catastrophe in Benghazi on September 11, 2012.