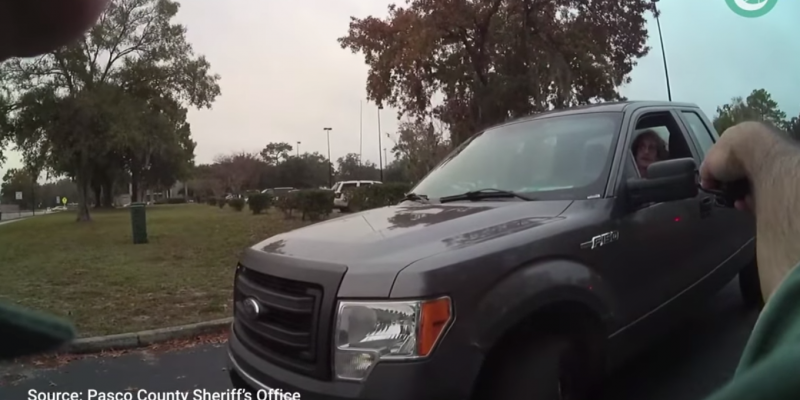 The parent of a River Ridge High School student in New Port Richey, Florida, scheduled an orthodontist appointment for her 17-year-old son William Miller, last December. When he went to leave the premises of the school property, a school resource officer drew his gun, swore at him, pointed it at him, and said he would shoot him.

Through a FOIA request, his mother obtained a copy of the officer’s body camera footage from the day of the incident and uploaded it to Facebook.

EVERYONE SHOULD BE OUTRAGED BY THIS AND THE SCHOOL ADMINISTRATORS SHOULD BE FIRED.

The video footage shows William Miller behind the wheel of his truck attempting to pull out of the school’s parking lot. Standing in front of him is the school resource officer, and Cindy Bond, a River Ridge High School “discipline assistant,” blocking the exit lane.

The three are arguing over whether or not William is allowed to leave campus. Williams reportedly did not sign into school because he had an appointment and was only on school property to begin with because he dropped off a friend who had missed the bus. No good deed goes unpunished.

When he tried to leave, Bond said, “You have to have permission from a parent to leave.”

Bond appears to be insane.

“You’re truant,” says the officer, whom the department would not identify, said. “You’re gonna get shot, you get another f—— foot closer to me. You run into me, you’ll get f—— shot.”

Within 16 seconds, the officer threatens to kill a 17-year-old unarmed student, twice.

This person also appears to be insane.

Neither should be employed by the school or funded by taxpayer money for their behavior. Their conversation is absurd:

“You’re not holding me here, right? But you’re standing in the way so I can’t leave,” William said.

“This is my campus, brother,” the officer replied.

The officer told Williams, “You’re trying to leave campus, that’s what truant is.”

Williams replied, “No, I’m not truant. I’m allowed to leave campus. I am old enough to leave. Are you holding me here against my will right now?”“You’re defying Ms. Bond, using profanities,” the officer said, adding that Williams take an early vacation (what?!!!) and not return for the rest of the school week (what?!!!).

“You’re a high enough authority to do that right?” Williams asked.

For this three minute argument, William faced a massive punishment from the school. The school administrators now appear to be insane.

According to The Tampa Bay Times, Williams was suspended from Dec. 17 until Jan. 9, then was expelled from the school and sent to the Harry Schwettman Education Center!

According to the school’s website, the center is a “voluntary educational program the district provides for students who have violated School Board policy, been recommended for expulsion or have a behavior pattern which has not been improved by a continuum of positive behavior and academic intervention strategies.”

“All three were acting like children and all three are wrong,” Nedra Miller said. “But the cop more so. He’s just flat out not OK to be around children. I was shocked that an officer of the law working with children would speak to my son that way. They should both be removed from their jobs.”

It appears that Miller has a solid case to sue the school.

Her son’s experience is yet another reason not have children in the public school system.