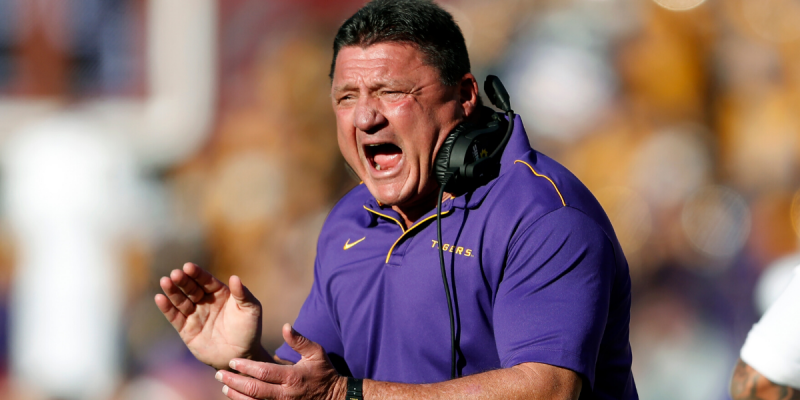 LSU head coach Ed Orgeron will now be able to buy even more tickets to paradise for him and his wife if he wants to.

Coach O set the program standard by reaching 40 wins in just 49 games in Baton Rouge. Throw in that unforgettable 15-0 national championship season, and you knew the money would come.

Orgeron’s six-year contract extension is valued at $42 million. It will pay him $8.7 million during the 2020 season, trailing only Alabama’s Nick Saban, who will make $9.1 million, according to Steve Berkowitz.

The 58-year-old from Larose, Louisiana was hired, after an interim spell to end the 2016 season, with one of the lowest salaries in the SEC at $3.5 million. He earned an increase to $4 million after last year’s 10-3 finish and Fiesta Bowl victory over undefeated Central Florida.

“He is well-deserving of this new contract,” LSU athletic director Scott Woodward said, “which should make clear our commitment to Coach O and the direction of our football program.”

Orgeron reached the 40-win plateau in one game fewer than his predecessor Les Miles. The 81.6% winning percentage includes an 11-1 mark in his last 12 games against top-10 opponents, with a college football record seven of those victories coming this past season.

Three years ago, in February 2017, on “Coach O Day” in Larose, Orgeron gave a bold promise that any coach can say:

“Some of the naysayers will laugh about this, but in a very short period of time, LSU will be back in the SEC championship game and in the (College Football Playoff) final four series for the national championship. I promise you that.”

Coach O didn’t just promise with his Cajun accent. He delivered. And LSU fans can only hope that there will be many more tickets punched to playoff paradise in the years to come.

Interested in more news from Louisiana? We've got you covered! See More Louisiana News
Previous Article University of Texas sports programs took in $210.4 million in 2018– the most in the U.S.
Next Article Sen. Bill Cassidy proposes bill revising how chemical abortions are offered