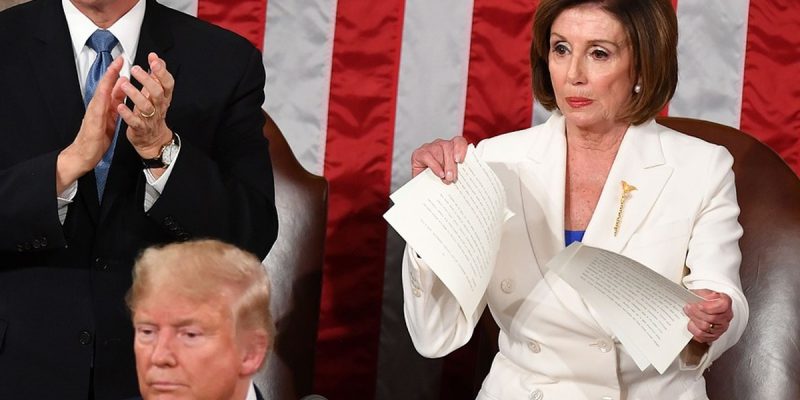 Much has been said over the last 48 hours about Speaker Nancy Pelosi’s antics during President Donald J. Trump’s delivery of his State of the Union address Tuesday night. Her dramatic facial expressions and eye-rolling were enough to violate the rules of decorum and the traditions of civility in the House, but when she ripped up the written document on live television, she crossed a different line.

Reaction to Pelosi’s outrageous display has been swift—ranging from calls for her resignation to a request for an investigation by the House Committee on Ethics. While it is obvious the Speaker broke House Rule XXIII (the “Code of Official Conduct”), her supporters are working overtime to dismiss the very serious charge that she actually committed a crime. Below are initial responses to the primary questions being raised.

1. Does a specific statute prevent destroying an official House record?

It does. The statute on point, 18 U.S.C.A. 2071, is entitled “Concealment, removal, or mutilation generally,” and reads in relevant part:

(a) Whoever willfully and unlawfully… mutilates, obliterates, or destroys… any record, proceeding, map, book, paper, document, or other thing, filed or deposited with any… public officer of the United States, shall be fined under this title or imprisoned not more than three years, or both.

(b) Whoever, having the custody of any such record, proceeding, map, book, document, paper, or other thing, willfully and unlawfully… mutilates, obliterates, falsifies, or destroys the same, shall be fined under this title or imprisoned not more than three years, or both; and shall forfeit his office and be disqualified from holding any office under the United States.

2. Does a State of the Union address fit that statutory definition?

Some pundits argued today that the papers Pelosi ripped to pieces were not “government property” or a “government record,” but rather her own “personal property” to dispose of as she desired. They insisted it was a “mere copy” of a speech that had no value or legal protection whatsoever. However, the pundits making those arguments seem to misunderstand the seminal nature of the specific document Pelosi mutilated.

Unlike the countless number of common photocopies of the State of the Union address that have been printed, distributed and even been made available to the public in electronic format online, the particular pages that Pelosi destroyed were quite different. That document was more than just unique—it was the original, autographed address officially and ceremonially filed and deposited with the House, and thus was the only one of its kind. To understand its distinctive nature, one must understand the features of the document and the circumstances by which it was presented.

First, the State of the Union address itself is an exercise required by Article II, Section 3 of the Constitution, which specifies in relevant part that the President “shall from time to time give the Congress Information of the State of the Union, and recommend to their Consideration such Measures as he shall judge necessary and expedient.”

Sections 168-170 of the House Rules and Manual of the 116th Congress explain the rich history of these messages to Congress and the mechanics of how they are formally received as follows (internal citations omitted):

In the early years of the Government the President made a speech to Congress on its assembling, but in 1801 President Jefferson discontinued this practice and transmitted a message in writing. This protocol was followed until April 8, 1913, when the custom of addressing Congress in person was resumed by President Wilson and, with the exception of President Hoover, has been followed generally by subsequent Presidents. A message in writing is usually communicated to both Houses on the same day, but an accompanying document can be sent to but one House. The President’s State of the Union message is referred on motion to the Union Calendar and ordered printed…

When the President has expressed desire to address Congress in person a concurrent resolution is adopted by both Houses arranging for a joint session to receive the message. The Speaker presides and the President of the Senate (the Vice President) sits to the right of the Speaker…

The ceremony of receiving a message in writing is simple, and may occur during consideration of a question of privilege or before the organization of the House…

Although a message of the President is always read, the latest rulings have not permitted the reading of the accompanying documents to be demanded as a matter of right. A concurrent resolution providing for a joint session to receive the President’s message was held to be of the highest privilege.

As these excerpts indicate, what happens at the Speaker’s rostrum during each State of the Union address is dictated by the Constitution and more than two centuries of custom and tradition. As the House Parliamentarian and Clerk can attest, every President hand-delivers just one signed, official copy of his address to the Speaker of the House and one to the President of the Senate (the Vice President). Those two documents are not like all the other copies of the address that may be in existence on paper or online, because those two are deemed the ORIGINALS, personally transmitted from the top executive officer of the government to the two top legislative officials of the co-equal branch. It is from those two originals that the Congressional Record is made and all duplicates are deemed produced. These two original documents are thus not the “personal property” of the two recipients, but rather the permanent record and property of their respective houses of Congress. (For those same reasons, the House original and the Senate original are not—as some pundits opined today—versions that must be submitted by the White House to the National Archives under the Presidential Records Act of 1978.)

The “ceremony of receiving a message in writing,” like the original State of the Union address, is similar for the other original messages that are required by law to be transmitted from the President to Congress. For example, Section 169 of the House Rules and Manual notes that 31 U.S.C. 1105 requires the President to transmit an original, official copy of the annual budget to the House in the same ceremonial manner, and thus each of those documents likewise becomes an official record of the House upon its receipt.

3. Was Speaker Pelosi a legal “custodian” of the document she destroyed?

By a plain reading of the applicable statute, 18 U.S.C. 2071(b), once President Trump hand-delivered the original document to Nancy Pelosi, she became the person “having the custody of such record.” That custody was accompanied by the specific legal responsibility to preserve it. See, e.g., Martin v. U.S., C.C.A.8 (Indian Terr.) 1909, 168 F. 198, 93 C.C.A. 484 (“‘Custody’ means keeping, and implies responsibility for the protection and preservation of the thing in custody.”) The term “custodians” under § 2071(b), “does not apply only to those who are custodians of records in technical sense, such a clerks or librarians, but rather, includes others working in government agency who have access to sensitive documents.” U.S. v. Poindexter, D.D.C.1989, 725 F.Supp. 13.

When asked why she ripped up the document on live television, Speaker Pelosi suggested in a tweet that her actions were justified because she believed the address was “a manifesto of mistruths” and filled with policies she disagreed with politically. It is fortunate for history—but quite unfortunate for Mrs. Pelosi—that in the statutes requiring the preservation of government records there are no exceptions for political disapproval or personal disagreement with the contents of those records. See, e.g., U.S. v. Eberhardt, C.A.4 (Md.) 1969, 417 F.2d 1009, certiorari denied 90 S.Ct. 907, 397 U.S. 909, 25 L.Ed.2d 90 (In prosecution for injury to government property, mutilation of public records and interference with administration of Selective Service System, the court did not err in refusing to treat as possible negation of criminal intent the defendants’ belief that war in Vietnam is illegal and immoral); McInerney v. U.S., C.C.A.1 (Mass.) 1906, 143 F. 729, 74 C.C.A. 655 (It was not a defense to a prosecution for stealing or destroying a public record that such record was technically imperfect).

5. Has any previous Speaker been prosecuted for mutilating government records?

Because no previous Speaker of the House has ever been engaged in the egregious conduct of destroying government documents in this manner, none has ever been prosecuted for the crime. Thus, while the plain language of 18 U.S.C. 2071 seems to clearly apply on its face to Speaker Pelosi’s actions on Tuesday night, it is a case of first impression. Millions of Americans believe it is a case that should be duly prosecuted.

HOUSE ETHICS DISCLAIMER: While I litigated constitutional law cases for two decades prior to being elected to Congress, I am no longer engaged in the active practice of law because House Rules prohibit sitting Members of Congress from doing so. Accordingly, it should be noted that the views expressed here are my own opinions and are not intended to provide legal advice. This is a brief summary that includes general information about legal issues and developments in the law. It is for informational purposes only and may not reflect all applicable legal analysis. These informational materials are not intended, and must not be taken, as legal advice on any particular set of facts or circumstances, to any particular person or persons.