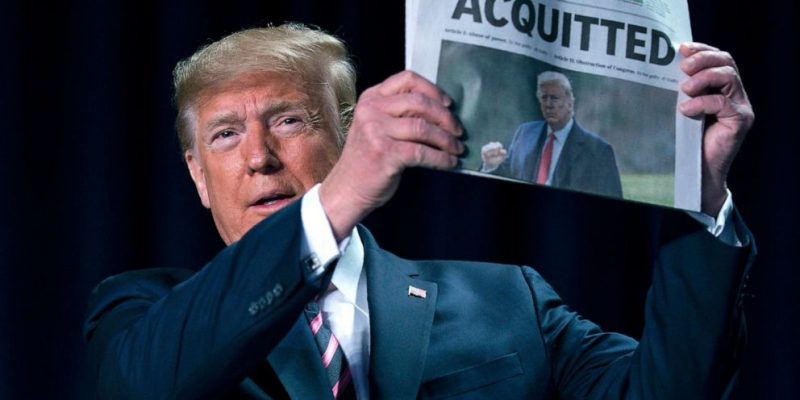 President Donald Trump is striking back at his Democrat rivals who tried to remove him from office. One day after he was acquitted by the US Senate, the President dressed down Democrats in two separate speeches yesterday.

The 45th President kicked off the National Prayer Breakfast by holding up a copy of USA Today’s newspaper headline, “ACQUITTED”.

With House Speaker Nancy Pelosi sitting just a few feet away, President Trump let her have it saying, “My family, our great country, and your President have been put through a terrible ordeal by some very dishonest and corrupt people…”

A few hours later, President Trump addressed the Nation from the White House on the conclusion of his impeachment trial and he held nothing back.

The President began by calling the impeachment “a disgrace” and explaining that it may have been even worse of a set up had he not fired former FBI Director James Comey.

He continued, “We caught ‘em in the act – dirty cops. Bad people. If this happened under President Obama, lot of people would’ve been in jail for a long time already.”

The President reminded Americans that the Democratic National Committee and Hillary Clinton Campaign conspired to create and purchase the fake “Steele Dossier” which served as evidence for the FBI request for surveillance on the Trump Campaign.

President Trump explained, “They made up facts. A corrupt politician named Adam Schiff made up my statement to the Ukrainian President, he brought it out of thin air, just made it up… Adam Schiff is a vicious, horrible person. Nancy Pelosi is a horrible person.”.

The President reminded Americans that Democrats’ efforts to remove him were preceded by one lie after another including “Russia, Russia, Russia”, calling it all “bullshit”.

“45” said House Democrats have gone “stone cold crazy” so he will probably have to beat them again but added, “But I’ve beaten them all my life and I’ll beat ‘em again if I have to.”

The President proved that impeachment has not dulled his sense of humor, cracking several jokes including one telling Steve Scalise (R-LA) that he is better looking after being shot.

The President thanked his family, his legal team, and Republican Congressional leaders.

“I do make his job harder. I do agree with that, I do. The attorney general is a man with great integrity.” - President Trump, on whether his tweets have interfered with Attorney General William Barr's ability to perform his duties.
More Quotes