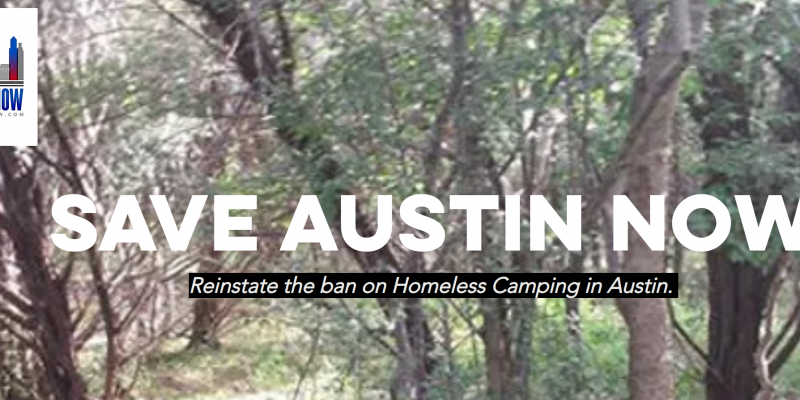 Save Austin Now on Monday launched an online petition to add an initiative on the November ballot to ban homeless encampments on Austin streets.

According to Travis County GOP chairman Matt Mackowiak, the ordinance reinstates the ban on homeless camping, the sit-and-lie ordinance, and extends it to cover the University of Texas campus, and bans panhandling from 7 p.m. to 7 a.m.

Gov. Greg Abbott tweeted a link to the petition, saying, “Sign the Petition to join the effort to improve the homeless situation in Austin. Austin is your city and you have the power to determine how it’s run.”

At a press conference Monday, Austin Police Association President Ken Casaday said the majority of officers’ time is spent dealing with homeless issues instead of on other matters despite an Austin-American Statesman article that suggests gun violence, not homelessness, is causing increased crime downtown.

In response, Abbott said of voters, “Austin leaders can’t fool you. Unlike them you actually know about the stabbings, beatings, fights, urinating, defecating, nudity, & harassment of women and girls. They may play pretend, but I will work with the legislature to restore order in Austin.”

This comes in the wake of the governor moving the homeless to a 5-acre piece of land off of U.S. 183. A Texas Transportation Commission meeting is scheduled for Thursday (Feb. 27) to negotiate a lease agreement with a nonprofit to manage the land for the homeless encampment.

The Austin Chamber of Commerce announced it plans to raise $14 million to address homelessness in partnership with ATX Helps.

There are already nearly 150 people living at the camp and personnel from the TxDOT, Texas Department of Public Safety, and state emergency management are on site. A DPS trooper is on site at all times, according to TxDOT.

“If the Travis County GOP Chair wants to spend a lot of money, time, and energy on a hurtful campaign that will do nothing to decrease our homeless population, that’s certainly his choice,” Austin City Council member Greg Casar said of the ballot initiative. “But if Gov. Greg Abbott and the GOP Chair truly cared about public safety and public health in Austin, they would be working with the Austin City Council to provide housing and services to people experiencing homelessness. Unfortunately, it seems clear that they are committed to making matters worse.”

“The homeless who are now camping at the state provided location are doing a better job governing than the City,” Abbott said. “They formed their own city council with elected members. They set rules for the homeless at the site. They insist on security & safety.”

Speaking to voters, he said, “In the meantime everyone in Austin has a role to play. You have a vote to decide if City leaders should be rejected at the ballot box because they have rejected your pleas for help. Texas will continue to seek compassion for the homeless while restoring the rule of law.”